Reminiscing about the ‘90s is nothing new to comic book readers nowadays, from people who were around at that period to younger folks who are curious about what happened that decade regarding comics. The medium itself went through a lot; from the financial successes of “The Death of Superman,” the launch of X-Men (Vol. 2), the rise of new companies and indie authors, to the burst of the speculators’ bubble and Marvel almost going bankrupt in December of 1996. If you want to dig deeper into the topic of this modest frame of reference before continuing, I suggest you check out this article by Ryan Lambie published by Den of Geeks!

But back to the topic at hand. 1996’s economical decadence at Marvel spawned a wave of repercussions that mutated the company itself through more than two decades and is still ongoing at the time of the publication of this article, especially regarding licensing out the IPs for live-action adaptations. This was nothing new for Marvel Comics, and, historically, they had only found some success with 1977’s The Incredible Hulk TV show, which spawned a couple of direct-to-TV films featuring Thor and Daredevil. 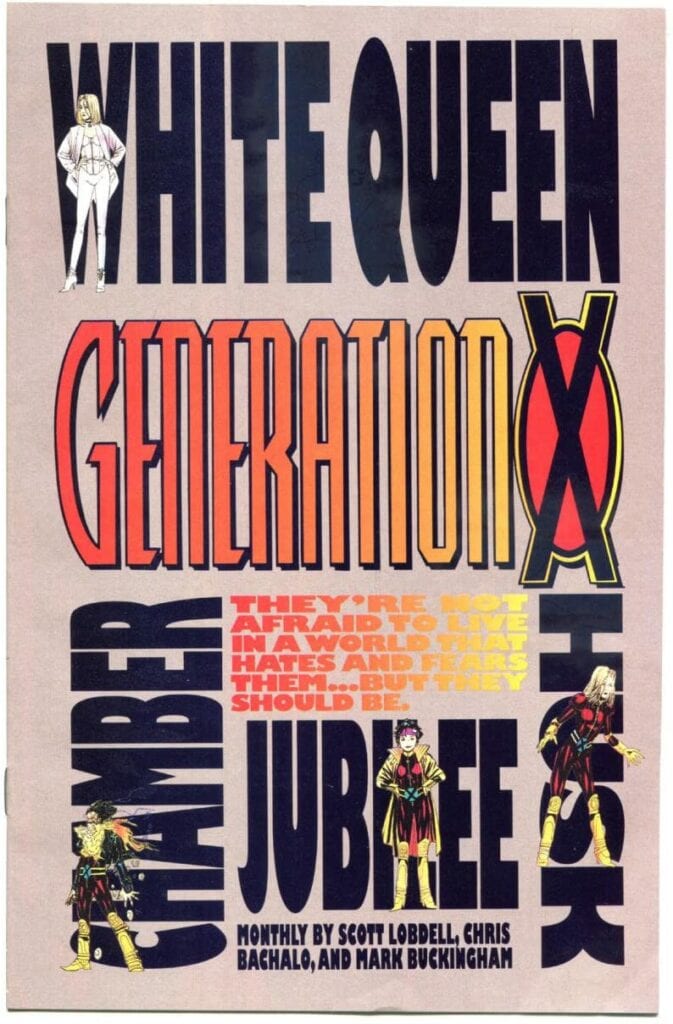 Generation X, the comic book, was a spin-off X-Men derived from the “Phalanx Covenant” storyline, which itself follows the “X-Tinction Agenda” arc of the X-Men titles. However, the actual first appearance of the team and its original characters was through a prologue freely distributed at San Diego Comic-Con ‘94 a few months before the publication of the Phalanx Covenant event. The team focused on the young 4th generation of X-Men, with Banshee and a reformed Emma Frost acting as their mentors. The former “White Queen” allied herself with the X-Men during one of Phalanx Covenant plots called “Next Generation.” mostly out of the grief the loss of her students, the Hellions, at the clutches of Sentinels sent by Trevor Fitzroy caused her.

This takes us to the production of Generation X, a TV movie/pilot produced in 1995 (still perceived as a stable time in comics), hoping to use the momentum of the X-Men’s popularity in comic books and cartoons, and heavily inspired by Joel Schumacher’s Batman Forever – released earlier that year and a huge commercial success, mostly because of the two previous acclaimed Caped Crusader films by Tim Burton. Released on February 20, 1996, and contrary to popular belief, this experiment was written and produced by Eric Blakeney (21 Jump Street, the ‘80s TV show), and directed by Jack Sholder (A Nightmare on Elm Street 2: Freddy’s Revenge). Generation X was not a rating flop and did exactly what the producers (New World Television’s Bruce Sallan and Marvel’s Avi Arad) wanted it to do. According to June’s Wizard: The Guide to Comics #58, the TV film ranked third for its time slot in the Nielsen ratings and performed unusually well with the 18-34 male demographic.

“It’s very much alive at Fox. There’s a very good chance for it to continue We could also possibly take it somewhere else, but we feel Fox is our family. It did well in the ratings, but it didn’t go through the roof either. We did really well with publicity – we got a nice piece in TV Guide – but we’re hoping to do a little better in total households. But those demos are very good. Networks like Fox, Warner Bros. and UPN really like those demos. I don’t see it as a mainstream network show.” -Bruce Sallan

“I think it should be a series. Fox should put it on Friday nights before The X-Files and they could have an “X-Night” every Friday.” -Avi Arad

Considering its historical context and budget, Generation X was more successful than any other Marvel live-action project since The Incredible Hulk, which ended production in 1982. I watched the original broadcast, and from what I remember, the effects didn’t look bad at all; maybe not the best, but they didn’t take away the suspension of disbelief of this teenager. 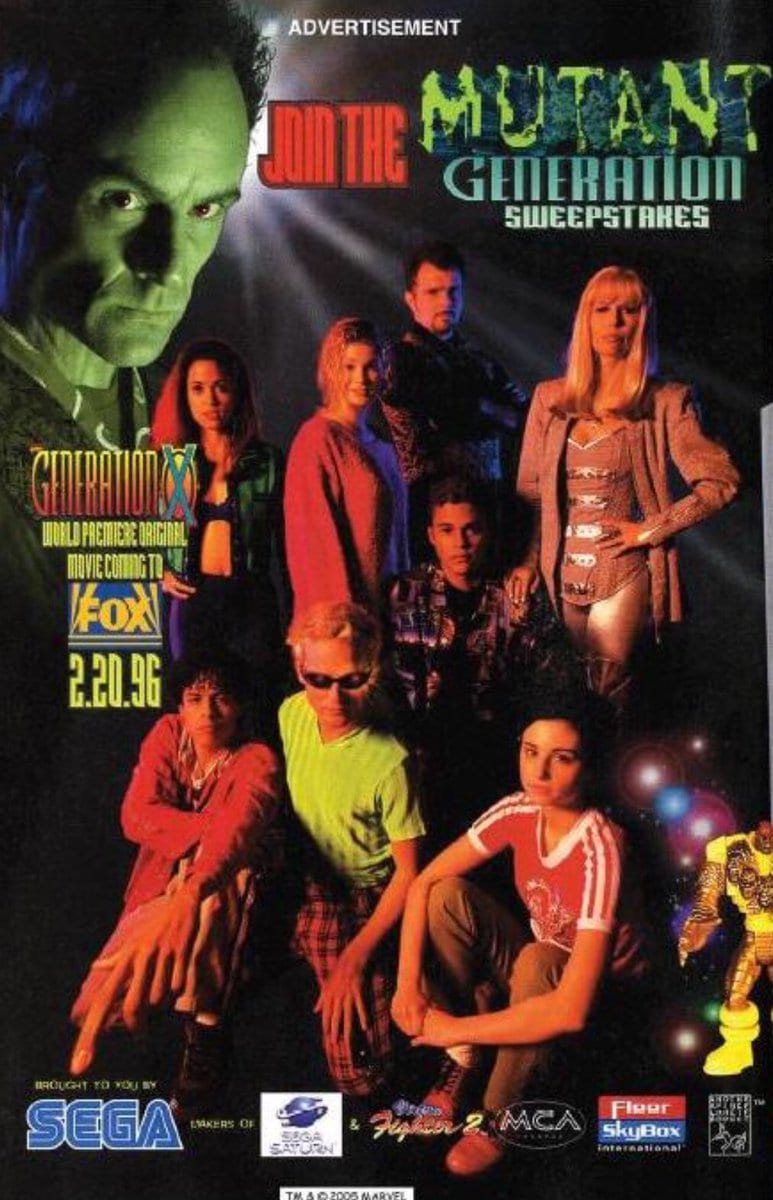 This also happens to be the first Marvel team live-action adaptation, prominently featuring Emma Frost (Finola Hughes) and Jubilee (Heather McComb). And even though Jubilation Lee is portrayed as a Caucasian girl, it probably was due to the character of Dazzler originally being written as the female teenage lead, but Jubilee was more popular because of the X-Men animated series. Obviously, back then, the ethnicity of the characters was not an issue with either the producers and the progressive fandom of the period, and the pilot also featured the brown-skinned Hispanic Skin (Agustín Rodríguez), who is central to the story. On the team, there’s also the Mondo (Bumper Robinson), a Black kid (in the comics, it was later revealed that he was the clone of a Samoan mutant), Monet St. Croix (Amarilis), the dark-skinned teenage female mutant Muslim of Algerian/French/Bosnian origin who also happens to be as perfect as people get (her character in the comic is like this and tends to subvert the Mary Sue paradigm). Banshee is played by Jeremy Ratchford, who had provided the voice for Banshee in the X-Men cartoon. Replacing the comic book characters Husk & Chamber for budget reasons, Buff (Suzanne Davis) and Refrax (Randall Slavin) were created. The first is a heavy-muscled strong woman, and the second is a mix between Cyclops and Billy Idol.

This is, pretty much, the most ethnically diverse film by Marvel to date, considering almost every progressive stack category was a first, especially if you figure in that the villain was disabled for a third of the movie as well. The mad scientist Russell Tresh was played by Matt Frewer of Max Headroom fame. and he was pretty much the most famous actor of the ensemble. His excessively over-the-top portrayal of the character, a mix between Jim Carrey’s The Mask, the Riddler, and Jeff Dahmer’s sociopathic tendencies, was certainly the talk of the town regarding the TV movie. 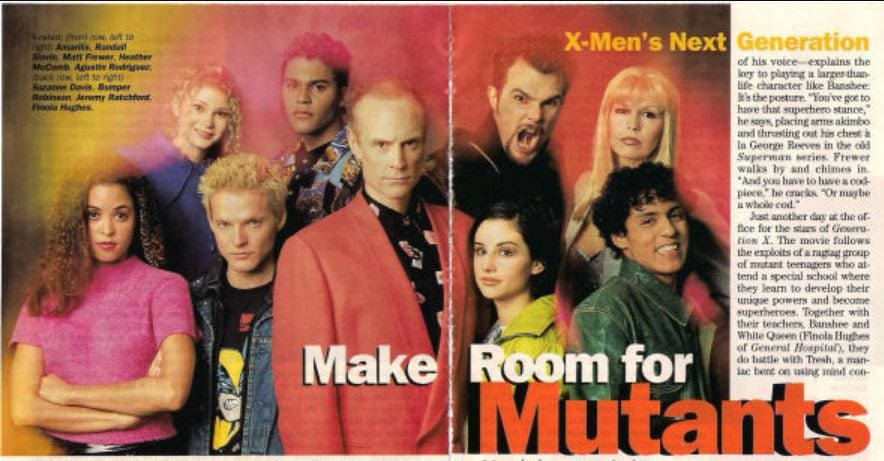 The TV film had charm and potential; it was edgy and over-the-top. It had an unfocused script centered around the conflict of what should have been secondary characters that made no sense regarding the Marvel mutant paradigm, yet it made an effort to somewhat portray that hated mutant minority theme. Consider, after all, this is also the first superhero team movie of all-time (considering Roger Corman’s Fantastic Four was never officially released and the bootleg versions didn’t become popular in the ‘90s; public peer-to-peer file-sharing wasn’t really possible until 1999, and even then, encoding a movie and transferring it would have been extremely complicated). Compared to what we had at the time, it was actually pretty faithful to the source material, and there were certainly worse adaptations. Hell, it was even closer to the comics than 2000’s X-Men!

What happened? I don’t think anyone really knows, other than the people involved with the production. But there are two things which happened around the time which possibly severely affected the life of the project: Marvel’s financial shitstorm of the ‘90s and Buffy the Vampire Slayer. Marvel, as a corporation, spiraled out of control in 1996. Debt from printing products that didn’t sell made the speculators’ bubble burst, and no company was printing out more variants than Marvel. Also contributing were Heroes World Distribution – Marvel’s own distribution company acquired in December of ‘94, which turned out to be a disaster from the start, destabilized the entire comic book direct market, and ended up collecting lawsuits from the clientele – and a very unstable editorial staff/talent roster derived from this and creators jumping around to release their own comics independently inspired by the Image generation (and even then they managed to put out better books than nowadays Marvel).

WTF? Did you just say Buffy the Vampire Slayer? 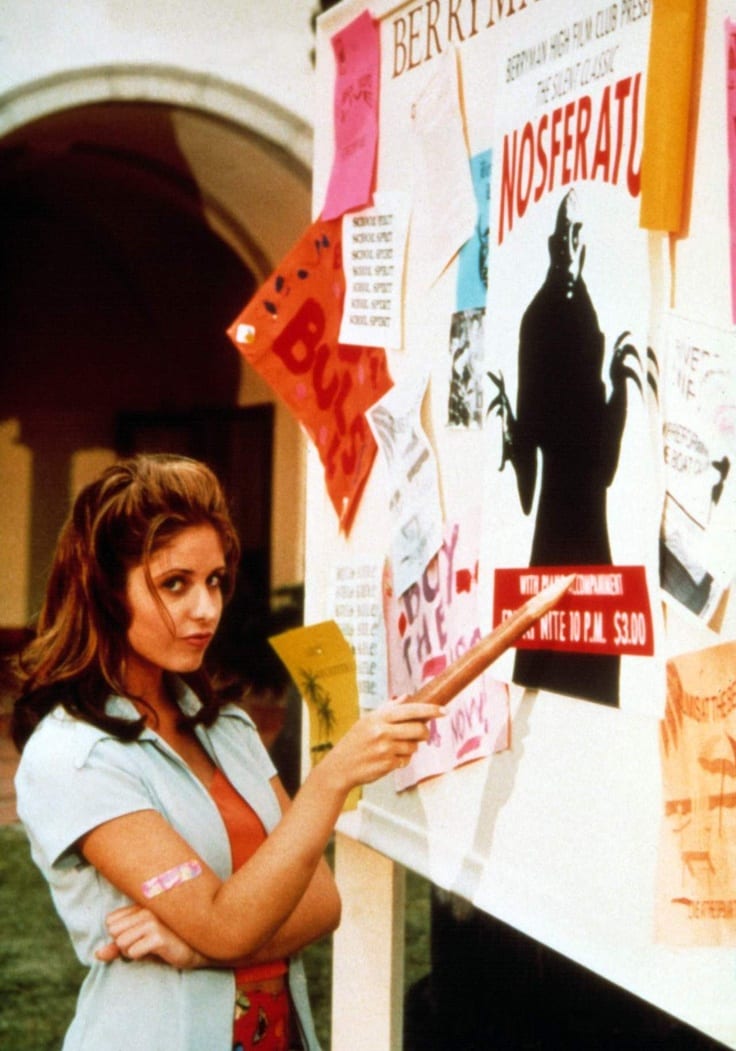 In 1996, Joss Whedon tried to revamp his then-failed IP from the butcher job his script received in 1992’s Buffy the Vampire Slayer film starring Kristy Swanson and made a 25-minute pilot produced by Fox starring Sarah Michelle Gellar. It was very similar in almost every single production aspect to Generation X, except it was shorter in length, and Whedon’s prowess as a show-runner was far superior and had a more natural understanding of the cultural zeitgeist of the ‘90s. The show was produced and distributed by Fox, to be broadcast by Warner and, later, UPN. Sound familiar?

In my opinion, having gone through all of this, it was more likely the corporate mess and the tough competition prevented Generation X from becoming a TV show. Instead, it’s now a forgotten TV film only Generation X nerds remember, but everyone can watch it on YouTube (and Buffy’s unaired pilot too).