Growing up, the only versions of Sherlock Holmes I enjoyed were a parody with the Chipmunks, Sherlock Holmes in the 22nd Century, and, to a lesser extent, the Sherlock Holmes episodes of Star Trek: The Next Generation featuring Data and Geordi LaForge as Holmes and Watson, respectively.  So when I discovered that Guy Ritchie was going to deliver a new iteration of the iconic detective with Iron Man star Robert Downey Jr., I was intrigued mostly because of the Marvel star’s involvement. Yet the more I watched that original trailer, the more enamored with the Holmesian mythology I became, and the film’s release quickly moved up my list of the movies I was looking forward to the most. I even began to look further into Ritchie’s filmography as a result. 2009 had already been a great year in film for me, in part due to the release of the long-awaited Star Trek reboot, so I didn’t know how the year would get any better.  Little did I realize that the boys from Baker Street were about to prove me wrong. So what was it about this film that finally allowed me to unlock the mystery of Arthur Conan Doyle’s greatest creation and one of the most filmed characters in cinematic history? Let’s find out.

Sherlock Holmes opens on the cobblestone streets of London, Hans Zimmer’s score building in the background while the camera focuses on the Mariah as Watson (played by Jude Law), Inspector Lestrade (Eddie Marsan), and several officers prepare to stop the evil Lord Blackwood (Mark Strong) from killing any more people. Our titular hero follows close behind as he heads towards Blackwood’s lair (which was filmed at and around St. Paul’s Cathedral), his inner voice narrating what needs to be done to subdue the henchmen. This is an effective tool throughout the film and allows the viewer to have an insight into the intricacies of the way Holmes’ mind works in a way that arguably eludes even his biographer and best friend. Speaking of Watson, after the capture and later execution of Blackwood, he is getting ready to propose to Mary Morstan. While in the books Holmes is more supportive of his friend’s marital ambitions, throughout the film he has significantly more trouble accepting that Watson will no longer be with him on his cases, to the point that Watson has to trick Holmes into meeting the future Mrs. Watson (a meeting that originally took place during the novel The Sign of Four; the duo meeting her at the same time as she comes to them as a client). This disagreement is played to great comedic effect throughout Sherlock Holmes, as the duo must figure out how Blackwood returned from the dead, thus putting Watson in need of restoring his reputation and giving Holmes more time with his dearest companion. This makes their dynamic far more important to the film than the mystery itself. Threaded through the mystery is Irene Adler, the only woman Holmes has ever loved. She asks him to find James Reardon (who, it turns out, is working with Blackwood) at the behest of her unseen boss, who is revealed to be the dreaded Moriarty. Sherlock Holmes culminates in Holmes, Watson, and Adler racing to stop Blackwood from taking over the world by tricking everyone into believing he can “summon the dark powers.” As the film ends, Holmes takes off after Moriarty as Watson begins married life, the two friends having come to a meeting of the minds on the subject.

There is so much I love about Sherlock Holmes. Right from the opening, there’s an immediate sense of place that made me want to explore every inch of the city as I constantly wondered what was just beyond the frame. Production designer Sarah Greenwood and set decorator Katie Spencer deserve major kudos for their work here. The Holmes and Watson relationship carries the audience through the story, their constant bickering always bringing a smile to my face and transcending any time period. (Look no further than the “Carguments” of McGarrett and Danno on Hawaii Five-0.) All of this is a heady brew that works all the better when you consider how faithful the movie is to the original stories. While Holmesian scholars tend to deride Ritchie’s adaptation, I can’t agree. On the special feature entitled Sherlock Holmes: Reinvented, Susan Downey, wife of Robert Downey Jr. and one of the producers, claimed that they had the technology to be more faithful to Doyle’s canon than some other adaptations were able to be. While it would be easy to see this as little more than lip service, a cursory read of the stories proves her to be correct. Various bits of literary dialogue permeate the script at every turn, with bits taken from A Study in Scarlett, “The Adventure of the Copper Beeches,” and the aforementioned Sign of Four, the influence of which permeates the film more than any of Doyle’s other stories. This is most clear with the McMurdo boxing match, which is merely mentioned during his first appearance in The Sign of Four, thus giving credence to Susan Downey’s words. 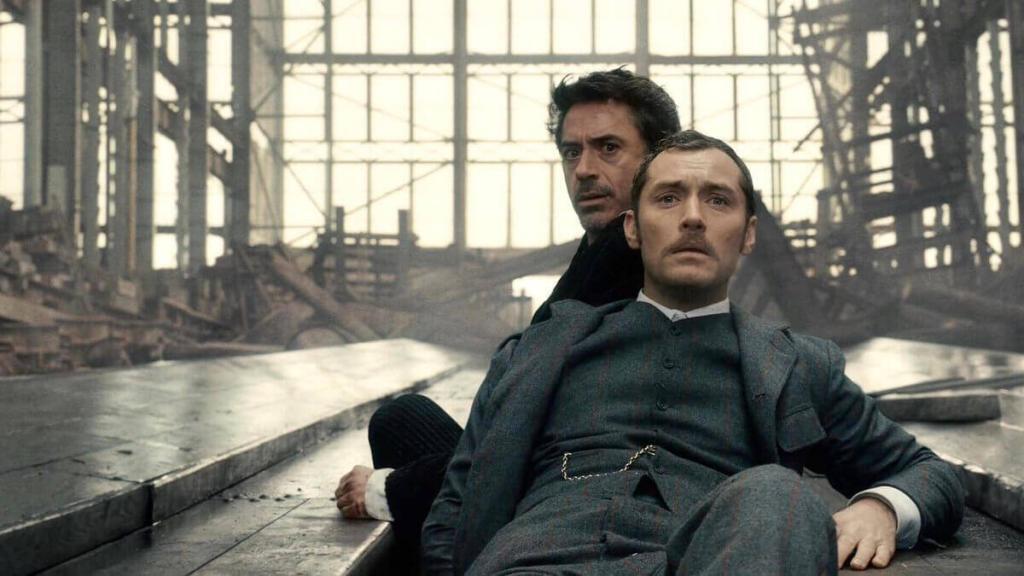 All of this is a testament to Ritchie – his frenetic, gritty aesthetic once again on display here following the likes of Snatch and RocknRolla – and the entire production, particularly Robert Downey Jr. and Jude Law,  as well as writers Anthony Peckham, Michael Robert Johnson, and Dark Phoenix’s Simon Kinberg, and, of course, producer Lionel Wigram, Wigram being largely responsible for getting the project together. One of the most intriguing aspects of Sherlock Holmes’ development was that  Wigram opted to create a comic in place of a traditional spec script, with concept artist John Watkiss proclaiming that what he saw in the theater of his mind differed from anything else that had been put to celluloid concerning the characters up to that point. I had often wondered about this comic, so I was pleased that I finally got to look at some of the pages on the special features of a new digital copy of the film.

With my long-held affinity for the 2009 film, one would think I couldn’t wait to see this iteration of the famous detective continue. While I didn’t feel that Game Of Shadows had the same magic as Sherlock Holmes, I still wanted to see more. So it was incredibly disheartening to learn that, despite Dexter Fletcher’s hiring to helm the third film, it looks like the production has hit a snag, with Black Adam taking the film’s December 2021 release and  Downey Jr. alluding to some monetary issues during a recent appearance on The Howard Stern Show. Hopefully, things will work out, and we’ll be able to see our favorite duo chasing down bad guys again soon

With great performances from Robert Downey Jr. and Jude Law, fantastic direction from Guy Ritchie, and a faithful script from Lionel Wigram, Simon Kindberg, Anthony Peckham, and Michael Robert Johnson, Sherlock Holmes will always be one of my favorite films. Despite the series’ ambiguous future, I’m glad I’ll be able to enjoy Ritchie’s first trip to Baker Street.