After last week’s trip to Hong Kong, I was excited to revisit one of my favorite locales in not only the Arrowverse but also the DC Universe as a whole: Nanda Parbat. While many fans took issue with this storyline in season 3, I felt the producers portrayed the League of Assassins in a way that differentiates it from previous iterations, so I was curious to see what kind of coda “Leap of Faith” would bring to the League and how Thea might factor into the story.

“Leap of Faith” begins in Nanda Parbat, with Oliver fighting a hooded figure who is quickly revealed to be Thea Queen. Oliver soon shows his sister pictures of baby Mia, then fills her in on the Monitor and the Crisis he is facing, saying he needs to be 100 percent sure everyone will be safe after his death. But Thea, who is skeptical of his impending doom since Oliver has faced death more than once, agrees to help her brother. Meanwhile, in Hong Kong, Diggle and Lyla resolve to help Sandra and Connor Hawke, whom Lyla has been watching over since Bronze Tiger is on a deep cover op. Having missed their check-in, Lyla figures out that they are being held in Kasnia. Back at Nanda Parbat, Oliver and Thea get attacked by Talia al Ghul, who soon agrees to help them so long as Oliver will consider her debt to him repaid. She tells them any info on the Monitor her father may have had will be found in the catacombs beneath Nanda Parbat. As Diggle and Lyla zero in on Sandra and Connor in Kasnia, Oliver, Thea, and Talia find what they were looking for, only to be attacked by Athena and the Thanatos Guild. Athena wants to take the sword buried in the tomb of Al-Faith, the first Ra’s al Ghul, so they can restart the League of Assassins, with Thea being her main rival as the Daughter of the Demon (Malcolm Merlyn, the last Ra’s al Ghul).

Diggle and Lyla argue about what the next step of their rescue mission should be, with Diggle being extra cautious due to seeing Earth-2 disappear. After Talia betrays Oliver, he wakes up to see Thea standing over him, much to his chagrin. As the two of them head towards the sword, they talk about how far they’ve come, and Oliver tells Thea how she wasn’t alive on Earth-2. The Queen siblings are soon confronted by Athena, who has captured Talia, and after a fight that frees Talia, the three head for the crypt. After they get through a bunch of obstacles akin to an Indiana Jones movie, Thea challenges Talia to a trial by combat, which Thea ultimately wins. Diggle and Lyla split up as Lyla goes after kidnapper Farzad Qadir, while Diggle saves Connor and Sandra. Thea reads Al-Faith’s book, which reveals that the Monitor will cause the Crisis, not prevent it; this likely refers to the Anti-Monitor, someone about whom Oliver is unaware. As Thea convinces Talia to help rebuild the League of Assassins into a League of Heroes, Diggle and Lyla send the Hawkes on their way. Lyla makes Digg promise to remember the good times they shared. Interspersed throughout “Leap of Faith” are scenes with future Team Arrow as they take the fight to JJ, who is about to kill members of the Unification Movement. The episode culminates in the death of Zoe as the team is transported to Star City 2019 alongside Oliver, who gets to meet adult Mia and William for the first time. 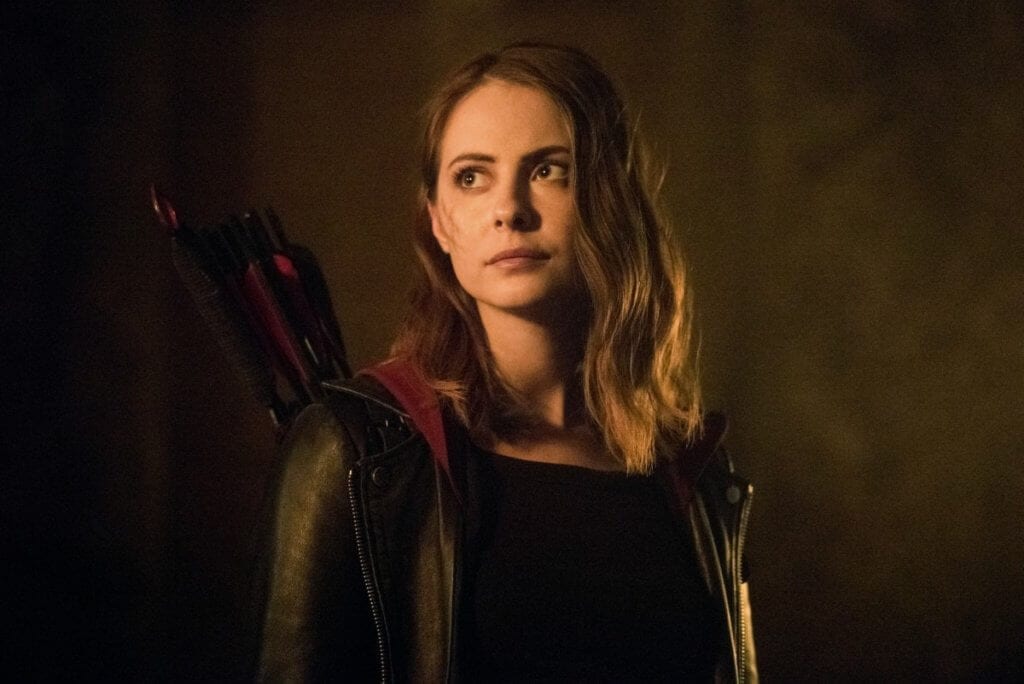 As usual, the performances in “Leap of Faith” are great, particularly Stephen Amell, David Ramsey, and Katherine McNamara. McNamara has stepped up this season and shown Mia’s growth over the last year. Having Diggle grapple with seeing Earth-2 vanish serves as a potent juxtaposition to the weight Oliver has been carrying this season over the Crisis as both of them endeavor to keep the ones they love safe. It was also gratifying to see Thea back, though I’m not too pleased her final scenes with Amell seemed to imply we wouldn’t be seeing her again when it has already been announced she’ll be recurring this season. Here’s hoping she comes back sooner rather than later. I also didn’t like that they insinuated that William would die in the future timeline and didn’t make for a good red herring. That being said, the majority of “Leap of Faith” works very well and comes together to form one of the most intriguing episodes yet. That’s very much due to writers Emilio Ortega Aldrich and Elizabeth Kim. They recaptured the atmosphere of Nanda Parbat but also gave it an old-fashioned adventure feel.

There’s a certain protocol actors must follow if they hope to direct a show on which they star, usually involving shadowing someone and ensuring they take the necessary prep time to get ready. It’s always a tricky proposition and occasionally doesn’t end as well as everyone may have hoped. I’m pleased to say this is not the case for Katie Cassidy Rodgers’ directorial debut. She embraces her new role in “Leap of Faith” and gives one of the first shots of future Team Arrow a sense of urgency that allows the audience to feel the same worry for William that Mia does, a sense of disorientation briefly settling in as we wonder about his fate. Hopefully, she steps behind the camera again in the upcoming spinoff. A special shout-out must also go to Blake Neely, who perfectly recaptures the Nanda Parbat themes that gave the season 3 arc a unique grandeur that set the storyline apart from anything that came before or after. Neely serves as a reminder of how important music can be in setting a particular tone.

Despite a questionable final scene between Oliver and Thea, “Leap of Faith” serves as a great conclusion to the Nanda Parbat storyline and succeeds in moving Arrow forward, with an ending that is sure to have people talking. With the series finale shooting this week and Emily Bett Rickards returning, here’s hoping the show continues its upward trajectory.