Much like previous episodes of Arrow this season, “Prochnost” is an homage to season 5, specifically the flashback portion of that season. Over the course of the first few seasons of the show, this was a storyline for which Arrow fans had been clamoring, so I’m glad to see Oliver’s past with the Bratva get its due during this farewell run.

“Prochnost” opens with Oliver teaching Mia about all his different arrows (with a Boxing Glove Arrow nod nowhere in sight) and the purpose of tennis balls as target practice. As he continues to show her how to maximize her skills, William shows his father and sister the general Curtis had mentioned in the last episode. His name: Alexi Burov. With Connor checking in on his mother and promising to stay out of sight, Diggle tells Oliver he has an idea of whom to recruit instead for his “two-man mission” to Bialya, where they will collect the plutonium. Oliver asks his children to come with them to Russia, something that Diggle initially questions given his dark past with the country. Elsewhere, Laurel is surprised by Lyla’s involvement with the Monitor. Lyla tells her she must get to the plans before Oliver does. Diggle finds Roy Harper – going by “Jason” – courtesy of William. Diggle convinces him to go to Bialya, explaining how the Crisis is bigger than anything they ever faced before. While Roy is initially reticent, he agrees to go along with the proviso that it’s just this one time.

“Prochnost” then cuts to Russia, where Anatoly welcomes Oliver, “his favorite American,” back to the country. Anatoly, surprised by seeing Oliver’s adult children, apologizes for treating William badly the last time they met. William responds in Russian, which shocks his father. Oliver asks him if he’s made any progress on the search for Burov, and Anatoly tells him the search would be made easier by calling his friends. Oliver flatly refuses, confusing Mia. Oliver has to explain to his daughter that his “friends” are not really friends (an exchange that I feel is at odds with the character McNamara has established over the last year). Meanwhile, in Bialya, Diggle and Roy are going after the plutonium. Roy quickly figures out that Diggle doesn’t really need him, and Diggle confesses that he thinks Roy needs to rejoin the team in order to atone for his past sins, not fix cars. An angry Roy tells him he’ll finish this mission, but after that, he’s going to go someplace where no one will be able to find him. In Russia, Anatoly says that he found Barov, but that since he likes betting on fights, the best place to find him is called Bloodbath. This excited Mia, since fighting was how she made money when she left home, much to Oliver’s chagrin. Oliver explains that Bratva fight clubs are different than what she’s used to and that he still looks at her and William as children. After witnessing a fight at the club, they talk to Burov about giving them the plans. Burov tells them he has given up on the idea of using them, but will give them over should Oliver win a fight and upsetting the favorite fighter, to which Oliver agrees. 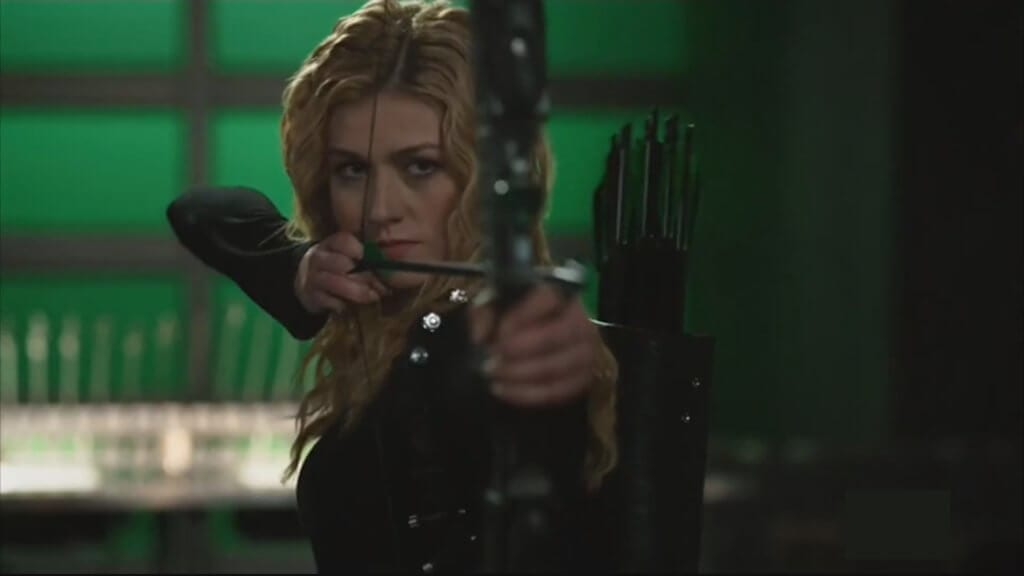 As Oliver gets ready to fight, Anatoly tells Laurel he doesn’t think she has changed. After the fight – which impresses Mia – a very happy Burov is about to hand over the plans when a Bratva boss gets upset with not only Mia’s eavesdropping but also Burov’s dealmaking. The Bratva boss kills Burov and captures Mia and Oliver, despite Oliver’s pleas to let them leave with the plans. Later, Oliver wakes up and scolds his daughter for not listening to him. She asks him why they called him “Kapiushion,” and he tells her that he was once a part of the Bratva. The Bratva boss threatens Mia, and Oliver tells him what the plans are for. While William, Anatoly, and Laurel try to find Oliver and Mia, Diggle tells Roy that, in the future, William finds him on Lian Yu, and he’s able to control his bloodlust by being a part of a team. The Bratva decides to have Mia beat several of his men and ring a bell hanging across the room inside of sixty seconds, something that Oliver is very much against, having been forced to do that himself. While Mia falls short of the task, the boss doesn’t kill her, saying that he needed to make sure they weren’t lying about the drive. Oliver and Mia escape thanks to Oliver dislocating his thumbs, a trick that Mia – who has been wallowing over failing to ring the bell – insists her father teach her. Just as they approach the door, the others find them, William having zeroed in on where they were. As they argue about how to stop the Bratva from selling the drive, Oliver insists his children keep out of it so they can stay safe, as he’s made a promise to Felicity.

While Diggle and Roy complete their mission, Anatoly tells Oliver he should tell his children what they need to hear, or else they’ll never be heroes.  Mia is frustrated over repeatedly failing, but Laurel tells her Oliver wasn’t any better. After the two pep talks, Oliver and his children come to a meeting of the minds, with Oliver telling them that he and Mia will fight together as a distraction. “Prochnost” cuts back to Bloodbath, where, thanks to some coaxing on William’s part, Oliver and Mia take on six different fighters as Anatoly and Laurel get the plans. They tell William they succeeded, and he signals his sister to wrap it up. Father and daughter pull off a disappearing act, and William says he could get used to this. Back at Anatoly’s, the former member of the Bratva tells Mia that she is his new favorite American. Oliver tells her not to get used to it since Anatoly has a lot of them. He tells Laurel that Diggle and Roy were successful. As Roy decides to stay in Star City, Oliver and Anatoly say goodbye, and Anatoly tells Laurel he was wrong to think people can’t change. Laurel goes to tell Lyla she won’t work with her and the Monitor, and Lyla tells her she won’t get her Earth back. It is then revealed that Oliver and Diggle were right behind Laurel, with Diggle saying he didn’t want to believe it. The episode ends with the three of them being knocked unconscious. 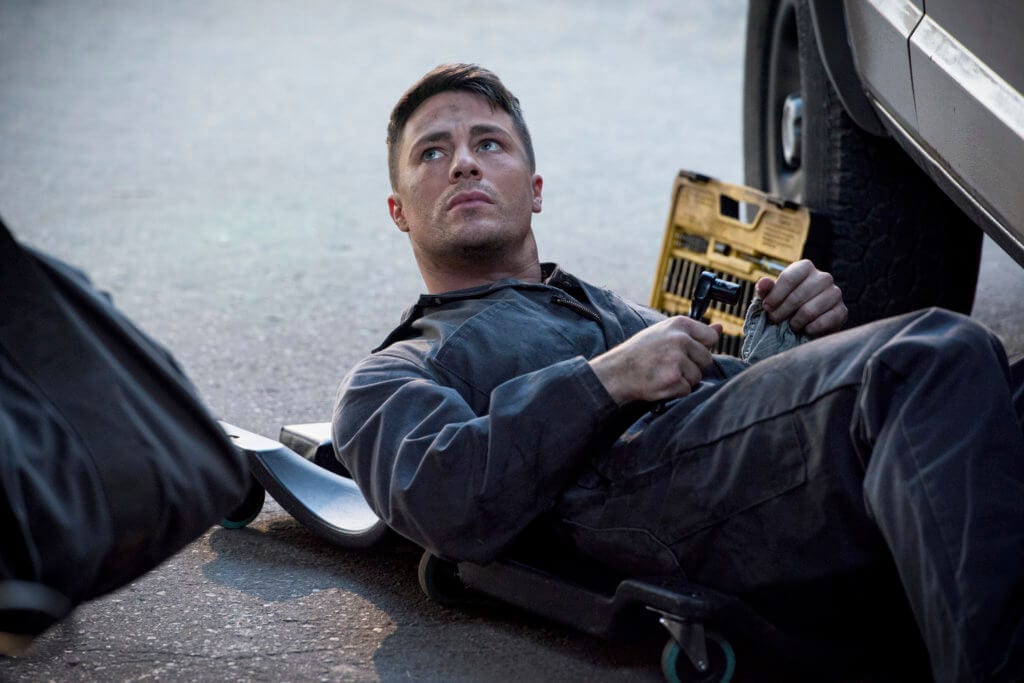 From the moment the title “Prochnost” was announced, one of the biggest questions for this reviewer was how they would handle Anatoly, considering how the show had dealt with the character in the past. I was very pleased to find that – much in the same way “Leap of Faith” had a few weeks ago – the episode served as a coda to the Russia storyline, with the maturation of the Anatoly/Oliver relationship permeating every scene they are in together. In a strange way, it almost felt like the relationship between Obi-Wan and Anakin in Star Wars Episode III: Revenge of the Sith, where Anatoly is no longer a mentor but an old friend. He gives Oliver counsel on how to approach his children as our titular hero struggles to see Mia and William as the heroes they have become and not the children he left behind. While some of this came off as a bit hokey from time to time, with Oliver’s supposedly imminent visit from the Grim Reaper, Stephen Amell, Ben Lewis, and Katherine McNamara all make the most of the Benjamin Raab-Deric A. Hughes scripted episode. Aside from the aforementioned Mia nitpick, Raab and Hughes continue this season’s tradition of providing closure to this particular storyline by highlighting how Arrow is at its best when it focuses on the characters rather than the MacGuffin. “Prochnost” allows our titular character’s relationship with his children to grow as he examines his past, warts and all. Yes, there’s the search for the plutonium to take down a god, but the writers ensured that the search served to advance Roy’s story arc, and I’m glad he’ll be involved in the last few episodes. All that being said, Arrow has always been known for its fantastic fight scenes, and director Laura Belsey allows the actors to shine both in the fight cage and outside of it.

“Prochnost” is another great episode of season 8 and a step up from last week. Despite a few nitpicks, I really enjoyed the Oliver and Anatoly dynamic and the growing relationship between the Queens. With this week’s cliffhanger ending, here’s hoping the upward trajectory continues as Paul Blackthorne makes his long-awaited return in next week’s episode, “Reset.”