This week simultaneously debuted and wrapped the CW’s annual Arrowverse crossover event, “Elseworlds.” For the last few years now, the cast of Arrow, The Flash, Supergirl, and Legends of Tomorrow have come together to face down a threat too large for any one of their respective teams. The threat this time? A mad doctor receiving a magical artifact known as the Book of Destiny that bestows upon its wielder the power to shape reality as he or she sees fit from an otherworldly being known as the Monitor. Dr. John Deegan, a man who had been ridiculed and cast out of the clinical community for his practices, uses his newfound power to warp reality on Earth-1 in such a way that Barry Allen and Oliver Queen (the real ones) change roles, with Grant Gustin and Stephan Amell now suiting up in their friend’s superhero suit instead of their own. Early on, this makes for interesting possibilities, but it soon gets old. “Elseworlds” also serves as a soft introduction to the character of Kate Kane/Batwoman, played by actress Ruby Rose, when the team travels to Gotham to track down Deegan and attempt to end his reality-warping shenanigans.

The CW has yet to put out an event that feels it holds true significance and weight, and “Elseworlds” is no exception. What starts as an event with myriad possibilities ultimately falls flat and winds up leaving little more than an aftertaste of a weak prelude to next year’s event, which they officially announced at the end of Part 3: “Crisis on Infinite Earths.” This is deeply concerning for me, and should be for any DC fan worth their salt, but we’ll get to that later. “Elseworlds” has its moments, to be sure, but most of the memorable ones are comedic or Easter eggs, as nothing else feels truly grand in scope or scale, and this, again, plays back to my concerns for next year’s event. My initial viewing of “Elseworlds” left me feeling perhaps a little let down, but a follow-up run-through is when my concerns truly surfaced, perhaps more so than I even expected once the idea of the CW attempting an event on the scale of “Crisis on Infinite Earths” set in. The beginning premise of Oliver and Barry switching roles is funny at first, but my focus was distracted away from them when they went to their respective teams for help. As far as the script leads the viewer to believe, every event that has transpired throughout the two Earth-1 shows has taken place exactly as we know them to have, and that the only visible difference is the actor swap. This, however, does not feel to be the case when they go to S.T.A.R. Labs, as the members of Team Flash all appear to have been given scripts that were written for entirely different characters; not one of them, aside from perhaps Caitlin, feels like the people we know. Can I also ask why in the world, after all the crazy things that have happened and all of the times that Barry has been right about things and his team not believed him (to their detriment, I might add), would they do so yet again? 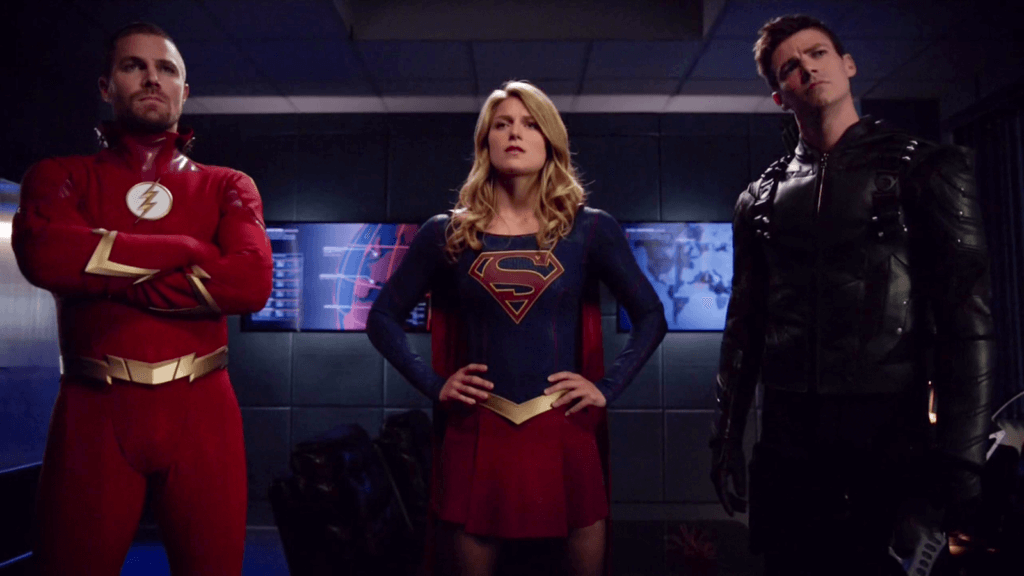 The disjointedness in “Elseworlds” doesn’t end there, however, as the CW tries to tug at the heartstrings by bringing us to Earth-38, where Kara, Clark, and a newly introduced Lois Lane are at the Kent Farm from the Smallville series. The use of Remy Zero’s “Save Me” and the visual nostalgia would have been a tear-jerker for this fan of the franchise if not for the abysmal scripting of the scenes. To begin, I’ve never been sold on Tyler Hoechlin as Superman, although he plays a great Clark Kent (I can relate this to Tobey Maguire’s poor portrayal of Spider-Man while being a solid Peter Parker). However, that pales in comparison to Lois Lane here. A combination of flatly-delivered lines and just bad lines overall (do we honestly need to bring gender politics into a superhero show right now, people?) set the tone for the lack of character this Lois Lane gives off, and I was left missing Erica Durance every moment Lois was on screen. The issues don’t end here either, as we apparently can’t go a single team-up event without the main male protagonists needlessly getting into a big argument with each other. There’s a great bit wherein Barry and Oliver are getting used to their swapped abilities by training against one another and Barry finally gets a chance to get back at Oliver for shooting him years ago. Oliver tells Barry to take things more seriously, something I think he took a little too literally as he uses Ollie’s “You have failed this city” line with a delivery that suggests a Dark Knight trilogy movie night preceded the scene’s filming. Additionally, the CW should be ashamed of themselves for not making better use of John Wesley Shipp than 30 forgettable seconds of screen time.

The CW’s choice to use Batwoman is an oddball one. On the one hand, they are likely constrained by various licensing rights with regards to DC characters and, therefore, many members of the Bat Family are off-limits. On the other hand, given Kate Kane’s gender and orientation, I’m not surprised that they went that route at all, despite the character being largely forgettable in the comics and her books not exactly being hits. Ruby Rose pulls off the look of Batwoman with aplomb, however – in fact, her suit might just be the best looking one the CW has had yet. Beyond the visuals, however, Kate Kane’s sequences and involvement begin to break down. Rose’s acting ability is never in question here, but the scripting is a different matter altogether, as her lines at times feel hollow. Their portrayal of Batwoman comes off as Diet Dark Knight. Oh, wait, we already have Oliver; make that Coke-Cherry Dark Knight. In fact, “hollow and forgettable” can be used to summarize Batwoman’s involvement in Part 2 of “Elseworlds” overall, as nothing she does comes off as truly important. Apart from a bit of fan service when she and Kara refer to themselves as “World’s Finest” (a line that describes only one duo of superheroes in all of comic books, and it isn’t either of these two), Gotham in its entirety is mostly forgettable, with a handful of fun Easter eggs in Arkham Asylum, as, just as the team successfully gets the Book of Destiny away from Deegan, the Monitor returns it to the mad Doctor. I hope when the CW does the pilot for Batwoman, they give Ruby Rose a hell of a lot more to work with; while I don’t personally care for Kane, I know that Rose can do a great job, and I would be willing to tune in if they give her proper treatment. 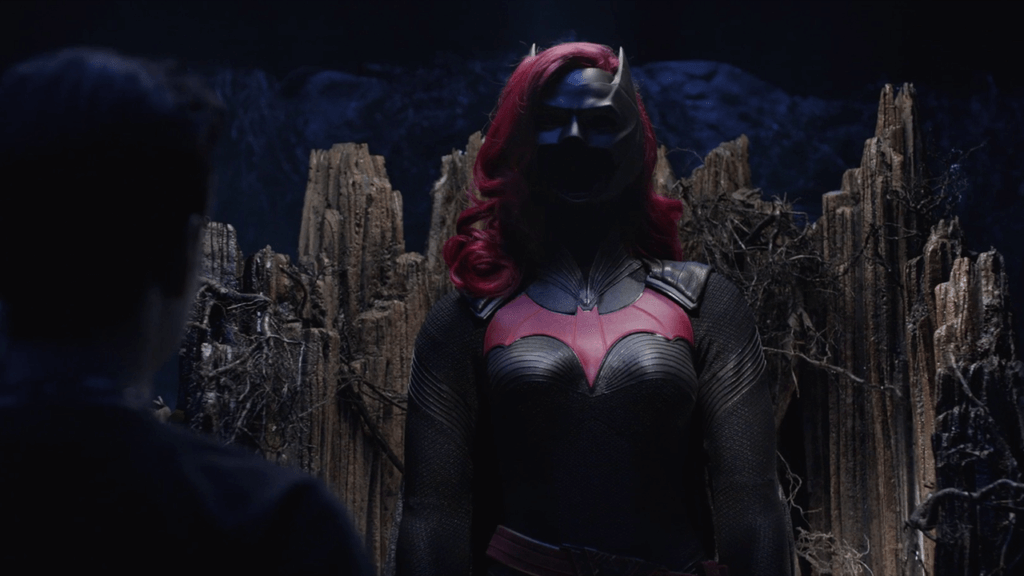 This brings me to the topic of the Monitor himself – or at least, he claimed to be the Monitor. When confronted by Barry and Oliver, he offers that he is testing numerous worlds for those with heroes strong enough to stand together against a coming threat from beyond, one that will swallow up entire worlds. This event, of course, is “Crisis on Infinite Earths,” and is something I’ve been predicting since we first saw the newspaper article depicting Barry disappearing in the future. All of the signs have pointed towards this event as being inevitable, and while it is justifying to have my predictions see fruit, it has resulted in far more concerns, which I’ll address in short order. I mentioned that the Monitor “claimed to be” himself, and the reason for that is, he didn’t come off as the Monitor at all. In fact, he seemed more akin to the Anti-Monitor in his attitude and actions, including actually wiping out worlds himself (not exactly something a cosmic guardian would do). Other events that played out over the course of “Elseworlds” cheapen historic events from the 1985-86 Crisis on Infinite Earths comic book event; at one point near the end, Barry and Kara are both zipping around the Earth as fast as they can in a last-ditch effort to get the Book of Destiny Away from Deegan, who has rewritten reality so as to make himself Superman (or at least to give him Big Blue’s powers). The velocities begin to break down the two speeding heroes, and they start burning up. This is something that takes away from any adherence to source material for “Crisis on Infinite Earths,” as not only do the original Supergirl and Barry Allen fall in the line of duty in said event, but Barry himself dies by running himself into nothingness. The two are saved by Oliver making some unseen bargain with the Monitor, although we can surmise its ramifications once the 2019 event reaches its conclusion: Oliver likely exchanged his own fate for those of Kara and Barry (or all the good that will do, seeing as Barry is supposed to disappear in the crisis event anyway).

Many things that happen over the course of “Elseworlds” feel weightless beyond the potential consequences of Oliver’s deal with the Monitor. Clark and Lois announce to Kara that they are having a baby, and Clark also proposes to the intrepid reporter. These (under normal circumstances) milestone events feel, as with much of the event as a whole, hollow. We have little reason to care about their having a baby, getting engaged, or even them leaving Earth for a while to live on Argo (so that Superbaby doesn’t kick a hole through mommy’s abdomen). There isn’t any investment in these characters to care, and that worries me with regards to next year’s event. Crisis on Infinite Earths is an event of such monumental scope and scale, with multiverse-altering consequences, and the CW has yet to show that they can do even a minor crossover event and present real consequences for the shows moving forward. Consider the ones we’ve had thus far: apart from a few references in the episodes immediately following each, the events are skippable and bear little to no weight on the shows moving forward. The CW couldn’t get Flashpoint right – an event that, in the grand scheme of DC comic books, is infinitesimal when compared to Crisis on Infinite Earths. How, then, can I not be worried about their desire to take on the latter? I was truly looking forward to “Elseworlds” due to the wellspring of possibilities from which it could pull stories. Instead, the CW chose to reduce it to a lukewarm prelude to an event that they’re less prepared to tackle than the heroes that will take part in it. I’m looking forward to getting back to the shows’ respective individual stories, which have been consistently solid so far this season, once they pick back up after the Christmas break.