This week saw the release of Rocketman, the musical biopic of flamboyant rockstar Elton John. I likely would have seen this movie for its subject matter alone, but the trailers have been fantastic too, so it was a must-see all around. The Kingsman films aren’t among my favorites, but Taron Egerton displays great charisma in them. Additionally, he’s also demonstrated his singing abilities in the otherwise unremarkable Sing – singing, in fact, Elton John’s “I’m Still Standing.” Let’s have a look at this purported “musical fantasy.”

Rocketman first encounters its subject wearing a red-and-orange devil costume, leaving his concert to take refuge in a rehab center. He joins some AA-type meeting, and this serves as our frame story; we learn about the star’s life as his peers do. From his unhappy childhood with an inattentive mother and neglectful father to explorations of his sexuality, the film never shies away from the darker side of Elton John’s story. Small details are switched around here and there, as is liable to happen with any true story movie adaptation. At key points throughout the film, John’s songs are performed jukebox-musical-style to accentuate events along his journey. Rocketman is a movie about music, love, and a man’s redemption.

Rocketman pursues a different musical style than that of the recent Bohemian Rhapsody – which I loved, by the way. Rather than realistically showing the songs being performed live, Rocketman is more of a traditional musical. Sometimes Egerton’s John performs his own songs, sometimes it’s other characters, and often they’re performed as ensemble pieces. Now, in light of this, let me tell you something about jukebox musicals: they suck. I hate them. It’s a lazy, cheap excuse to make a musical without really creating anything. I’ve never seen a musical with pre-existing songs and score (not including musical plays-turned-films) that managed to convince me that the songs both flowed naturally with the plot and enhanced the viewing experience; that is, not until I saw Rocketman this weekend. Films like Mamma Mia! and its sequel, as well as Gary Rydstrom and George Lucas’ bizarre animated movie Strange Magic, had previously convinced me that this genre simply shouldn’t exist. However, Rocketman’s musical interludes are among the best parts, displaying technical wonder as well as expanding the story and characters.

Taron Egerton is spectacular as Elton John; he sinks entirely into the role, regardless of what’s happening in the story. His singing is pretty good, but much more than that, there’s a sincerity to his performance that makes you forget it even is a performance. Jamie Bell amiably portrays Elton’s lyricist and best friend Bernie Taupin, and Richard Madden plays his manager and lover John Reid. It’s interesting that Aidan Gillen, another Game of Thrones actor, played John Reid in Bohemian Rhapsody last year. They provide very different portrayals of the music manager, and I’ll leave it at that. Aside from Thrones, I really loved Madden’s performance as Prince Kit in 2015’s Cinderella, so I was delighted to see him in the trailers for Rocketman. He plays against type here, and does so very well. John’s parents are played by Bryce Dallas Howard and Steven Mackintosh, and they do well enough in their supporting roles, particularly the former. Gemma Jones serves as a light spot in the future singer’s dreary childhood, his loving grandmother Ivy. She suggests getting him piano lessons, and eventually takes him to the Royal Academy of Music to accept a scholarship. Matthew Illsley appears as young Reggie Dwight, the shy little boy who will become a rock legend.

Of course, the songs in Rocketman are great; it’s practically a greatest hits album performed throughout the story. That being said, the staging of these scenes is incredible. Sometimes they’re straightforward musical numbers, but other times they go more surreal and dive headfirst into the “fantasy” aspect. The visuals are incredibly cool, and you should really see them for yourself. The vocal performances are also outstanding, particularly from Egerton. Some of the songs are note-for-note the same as the originals, but occasionally one has a new and different arrangement. I actually like that they did this, as it keeps the film fresh and interesting, and we already have the original versions of the songs. I don’t want to spoil it, but at one point Egerton recreates one of John’s iconic music videos, and it’s really cool to see. The attention to detail is always on point. The costumes in this movie are incredible, and again, they really look like John’s famous outfits. 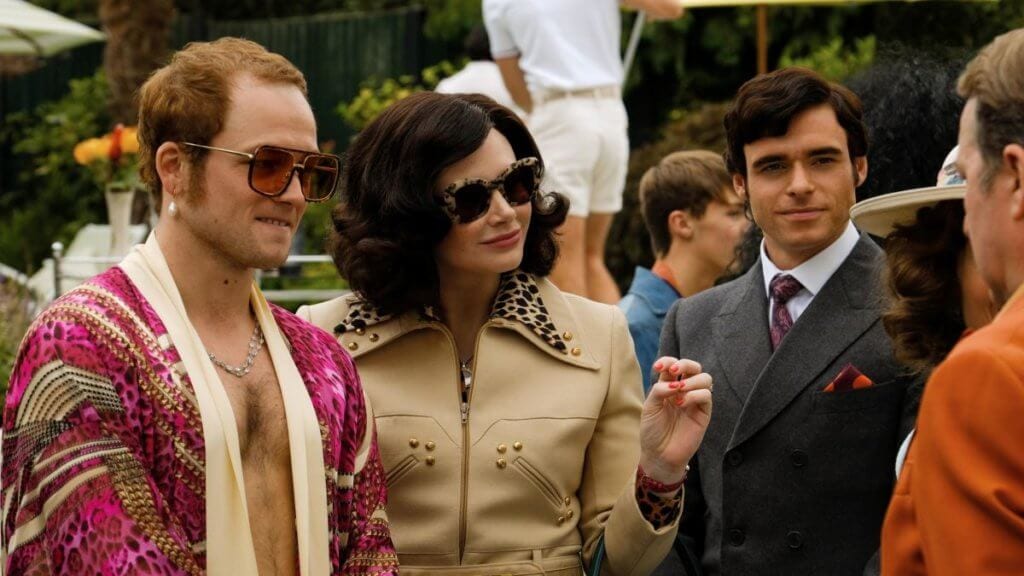 As for flaws, I don’t have many. There were a couple of moments near the middle when I wasn’t quite as invested as I was during most of the film. This is really nitpicking, but I also didn’t like young Reggie’s singing voice as much as Egerton’s. But that’s really pushing it as a criticism; personally, I don’t enjoy the sound of children singing in general, so it would be hard to please me with that anyway. So really, if anything, I might tighten up the pacing around the middle of the film, and that’s about it. The actors are all great, and the technical aspects are on point. While I liked Bohemian Rhapsody, I wonder if Rocketman will be more to the liking of those who had issues with it. Many of the same biopic story beats are there, like cleaning up one’s act and reuniting with estranged friends; however, Rocketman takes a very different and more surreal approach to its source material. I don’t know if I really have a preference; just some food for thought.

Overall, Rocketman is a winner. Elton John’s story is one that deserves to be told, and Rocketman does so with style and technical mastery. The acting – led by Taron Egerton – is top notch, the musical arrangements are inspired, and the costumes are superb. To be honest, the film got a little bit slow for me near the middle, but it is brief and by no means ruined the movie for me. Rocketman is an intricate character study and never cuts its subject any slack; it’s not just a highlight reel of an esteemed singer’s career. I would definitely recommend checking out Rocketman in theaters, especially if you’re a fan of John’s music.