“Shattered” sees Ahsoka rejoin Bo-Katan with Maul in tow. They discuss Ahsoka’s success and Mandalore’s need for a different kind of leader before Rex comes to take Ahsoka to a meeting with the Jedi Council. We see the conference from Revenge of the Sith, with Mace Windu voicing concerns about Chancellor Palpatine and threats to the Jedi. When Ahsoka and Rex arrive, Master Yoda remarks that she has done a great service to the Republic. She replies that she did her duty as a citizen; Master Yoda asks, “Not a Jedi?” and she says not yet. When Ahsoka mentions that she hoped to speak with Anakin, Mace Windu explains that he’s been sent to inform the Chancellor that General Grievous has been located. Ahsoka inquires about the Council’s suspicions of the Chancellor, but Mace brushes it off as Jedi business. As the other Jedi holograms disappear, Master Yoda asks Ahsoka if she had something to say or a message to Anakin, and she reluctantly says no. As Ahsoka and the troops prepare to disembark, the Mandalorians bring Maul safely trapped inside a box. Bo-Katan tells Ahsoka it’s a relic of a bygone era, and she replies that she thought Duchess Satine outlawed such devices. Bo-Katan assures the young Force-wielder that this is the last one. The two say goodbye and part ways.

Once aboard the ship, Ahsoka and Rex discuss the role of the Jedi in the war and how it goes against what she was taught. Rex tells her that, as a clone, he has mixed feelings on the war, as without it, the clones wouldn’t exist. The two exchange a salute as Ahsoka says the Republic couldn’t have had better soldiers, or she a better friend. Ahsoka has a dark vision as we hear Anakin, Palpatine, and Mace Windu’s confrontation during Revenge of the Sith. Meanwhile, Order 66 is given and the troops turn on Ahsoka. Rex tells the others he’ll do it, and as he tries to restrain himself, he yells to Ahsoka to find Fives. The clones open fire on their former commander and Ahsoka escapes into the ceiling. Rex sends some men to kill Maul and takes a few to find Ahsoka. Just as Maul is about to meet his end, Ahsoka dispatches the clones present and releases him. He realizes that Palpatine must be behind the actions of the soldiers and assumes that Ahsoka wants to team up after all. However, she merely wants him to create a diversion and won’t even give him a weapon to do it with. Ahsoka enters the droid room and activates R7, telling him that she needs help. He finds the information she needs on Fives, but it’s restricted. Ahsoka gives R7 Anakin’s passcode and is permitted to see a report Rex filed after the season 6 incident with Fives’ inhibitor chip. Meanwhile, Maul tears through a hallway filled with clones even without his lightsaber. The droids trap Rex alone in a hallway with Ahsoka and knock him out. Ahsoka and the droids take Rex to the medical bay and remove his inhibitor chip, freeing him from the Chancellor’s control. The clones cut through the blast door, and Rex comes to, killing several just as Ahsoka is losing the high ground. 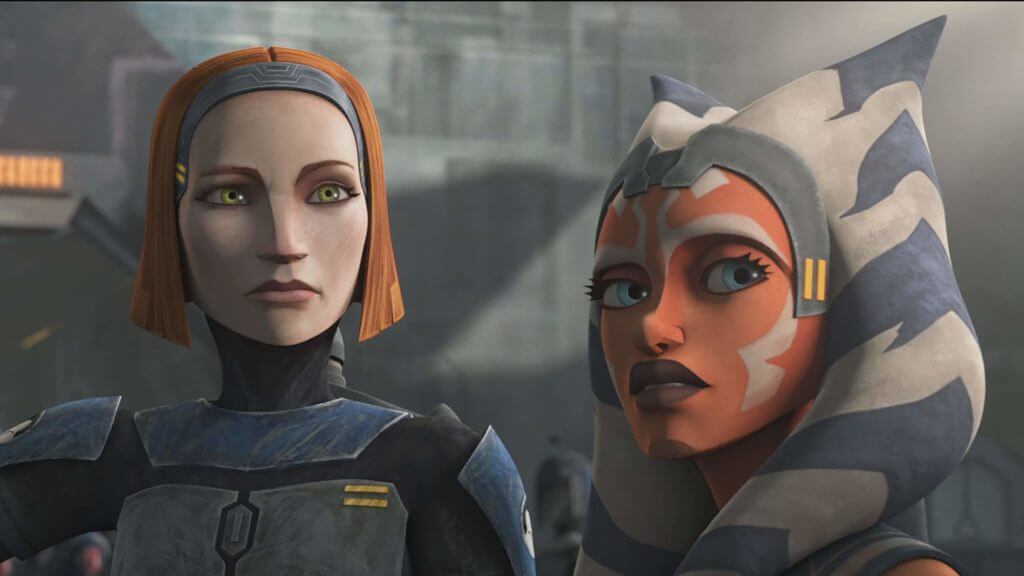 I feel like a broken record here, but “Shattered” is yet another great episode of The Clone Wars, filled with what will surely become iconic moments in their own right. It’s a shame The Clone Wars couldn’t have been finished before Rebels and The Mandalorian came out. Don’t get me wrong; the animation wouldn’t have been this fluid, and I’m glad we’re getting the conclusion at all. But I can’t help wondering how it would feel if I wasn’t sure if Ahsoka and Maul would make it out alive. It’s also hard to root too hard for Bo-Katan assuming leadership of Mandalore, knowing that her rule doesn’t exactly work out in the long run. Knowing what comes later grants a sadness to Ahsoka and Bo-Katan’s farewell, as we know that Mandalorians and Force-wielders won’t maintain the peace. We also don’t know when or if these two characters will meet again. However, I have a feeling The Mandalorian will bring them together if the Rosario Dawson rumors are true. The smoke effects on Mandalore as Bo-Katan and Ahsoka talk are really spectacular. Details like this remind us yet again just how far the art form has come since season 6 was released on Netflix. The animation this season has been incredible all around, but you can still tell they saved something special for the Siege of Mandalore, and I appreciate that. 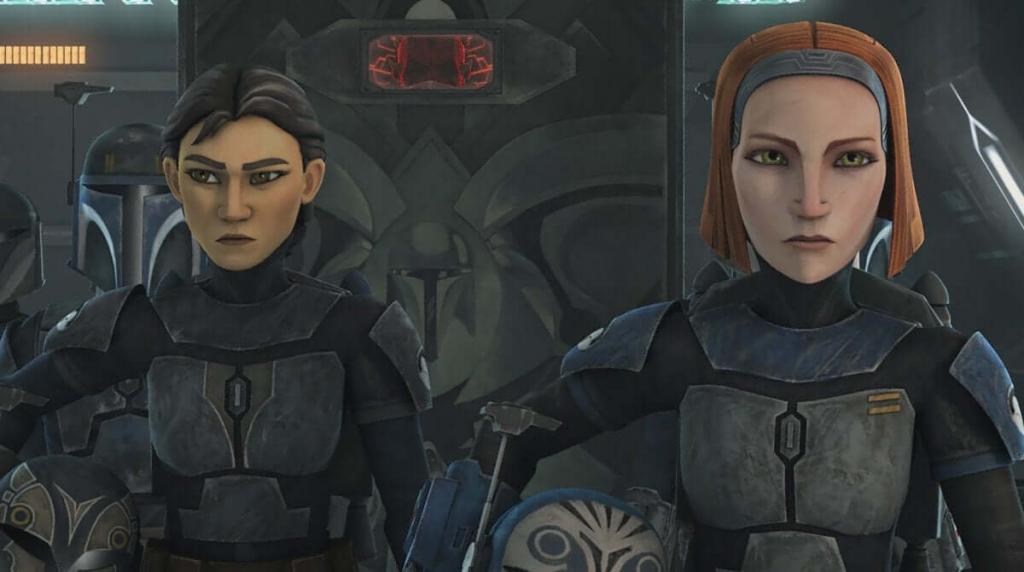 One thing I really love about this episode is Kevin Kiner’s musical score, specifically the way it creates this atmosphere of unease and inevitable doom. The scene where Bo-Katan congratulates Ahsoka on doing what many could not, capturing Maul, could have been played as a triumphant moment after all these characters have been through. Likewise, when the two women have to say goodbye, they could have gone more saccharine and tugged on the audience’s heartstrings. But instead, Kiner weaves a bleak, foreboding tune that never allows the viewer to forget what’s about to happen. And you know what? It’s still something of a shock when it does! I nearly lost it when Rex said, “I’ll do it,” turned his blaster on Ahsoka, and tried not to carry out the Order as a tear rolled down his cheek. It’s also chilling to see the clones still wearing their orange helmets in her honor as they turn their weapons on their former commander. This could very easily have turned out forced (pun intended) or distracting, but I love how this story runs parallel to the events of Revenge of the Sith. I got chills during the council meeting, the dialogue and visuals of which are drawn directly from the third prequel. With this scene and Order 66, we essentially get to see events we were already familiar with through the eyes of different characters who don’t understand what’s going on. As an aside, Mace Windu comes off as a total jerk when he refuses to tell Ahsoka what’s going on with Palpatine after he brings it up. She’s not a Jedi, so sure, she’s not privy to all of their concerns and agendas. But the way he calls her a citizen and the tone of his voice just feels extra douchey, especially in light of the way Ahsoka departed the Order. It’s interesting when Yoda asks Ahsoka alone if she has something to say. You can tell she wants to tell him about Maul’s vision of Anakin, but I suspect she feels it would be something of a betrayal to do so. After all, Anakin is the only Jedi who never once turned on Ahsoka or questioned her innocence when she was on trial. But we know that waiting to speak with Anakin in person was a mistake, as she won’t be seeing him again in his current form. I suspect she’ll come to regret her secrecy greatly.

There are a lot of callbacks in this episode, and for the most part, they work. I’m not sure if this was intentional (though I’d lean towards yes,) but I was reminded of the season four Umbara arc when Rex was forced to turn on his brother to save his friend. The context is a little bit different, but the look of horror and reluctance on his face made me think of when the clones realized General Krell had been turning them on each other in the field of battle. There’s also the moment when Ahsoka begins chanting, “I am one with the Force, and the Force is with me,” and a half-conscious Rex joins her. This is, of course, lifted from Donnie Yen’s character Chirrut Imwe in Rogue One. While I overall found this movie to be tedious and boring, his role and the mantra worked really well. Maul also borrows a page from Rogue One’s book, tearing through a hallway of clone troopers much as Vader killed all the Rebels at the end of the film. This scene is extremely brutal, and honestly, I’m surprised Kathleen let it hit the web in this form. Maul decapitates several troopers, impales some, and removes one arm. Much like Ahsoka, I’m not rooting for Maul or anything, but this scene was absolutely exhilarating to watch. The movements of the characters are entirely fluid and believable. While I’m not sure, I wonder if Ray Park also did motion capture for “Shattered.” 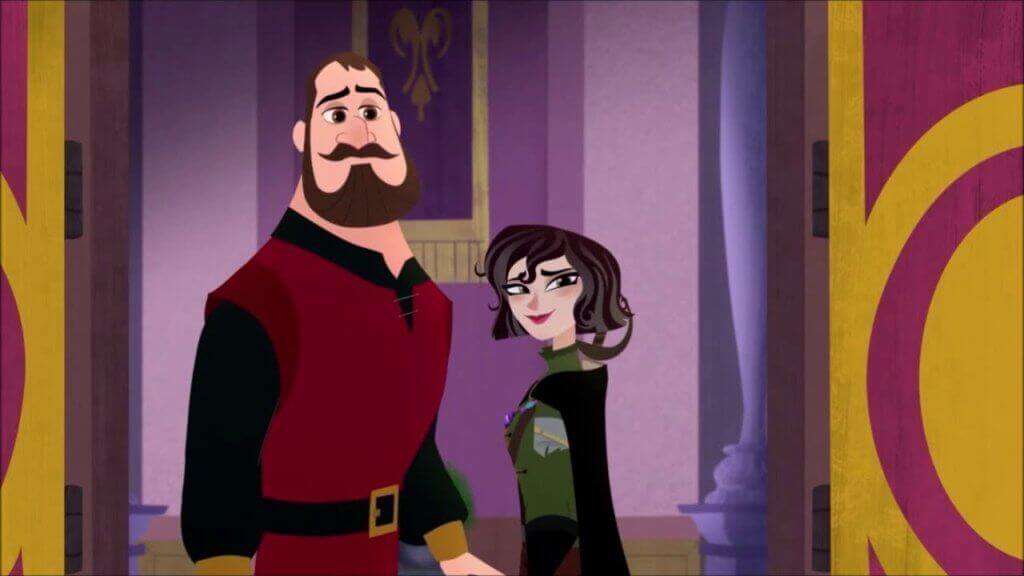 Overall, “Shattered” is another mind-blowing episode in the Siege of Mandalore arc. I genuinely don’t know what’s going to happen in Monday’s finale, but this entire arc has been getting better and better, so I’m definitely here for it. This is one of the best stories they’ve explored on the show, and I’ll be sad to see it end.