Now that “Crisis on Infinite Earths” has come and gone, The Flash returns with “Marathon,” a breather of an episode about people who refuse to take a breather. “Marathon” deals with the fallout of Crisis while setting up the second half of the season (since the Bloodwork storyline has been hastily discarded), and it manages to be more gripping and heartfelt than that boring, anticlimactic waste of a crossover was. It introduces a spiffy new title sequence too!

A mutual friend delivers Oliver’s parting gift to Barry, who is convinced it’s a clue to one last mission. Iris investigates the secret group that’s been using metahumans as assassins but draws her Citizen sidekicks into the line of fire as a result. Cisco tries to make sense of the newly merged Earth, and come to terms with what’s been lost in its formation. Killer Frost doesn’t do much because Danielle Panabaker is pregnant.

“Marathon” kicks off the next batch of episodes with a familiar, comforting scene: a just-reopened Jitters is being held up (by some of America’s dumbest criminals), and the Flash zooms in to save the day, to the applause of Central City’s adoring citizens. It’s a great way to open the show after Crisis, a reassurance that, while things have changed in the Arrowverse, the important aspects remain, and we can still count on the Flash. It’s a neat encapsulation of the challenge with which “Marathon,” and the rest of the season, are faced: the effects of Crisis need to be felt, but the show needs to stay the one its audience loves. If this week is any indication, The Flash will walk that tightrope gracefully.

First, though, it has to get the characters past Crisis, and “Marathon” does that by examining what people do when the apocalypse passes by and they’re left alive. Barry was prepared to die, and his friends and family were steeling themselves to lose him. Are relief and a return to normalcy as simple as one would think? They aren’t for the heroes of Central City, particularly Barry, Iris, and Cisco. There are lingering doubts and pain from Crisis with which they’ve got to reconcile themselves, and “Marathon” wisely has each character face a different one.

For Barry, it’s the loss of his friend and the guilt of being the one who survived. Oliver died in Barry’s place, and for a hero who’d been preparing to make the ultimate sacrifice, that’s a bitter pill to swallow. When Diggle hands him Oliver’s mask in “Marathon,” Barry cannot take it at face value. Oliver had to have another purpose, something only Barry could do, something that would make Oliver’s death mean something. But the meaning is in the gift itself; to honor his friend, Barry need only live as the good man that once inspired Oliver to be better, the guy who saw the good in a dark, damaged soul and helped make him the kind of hero who would save billions by giving his own life. Every day, Barry protects those he loves and those he’ll never know while wearing a mask, just like Oliver, and that’s what his next step is: to live. 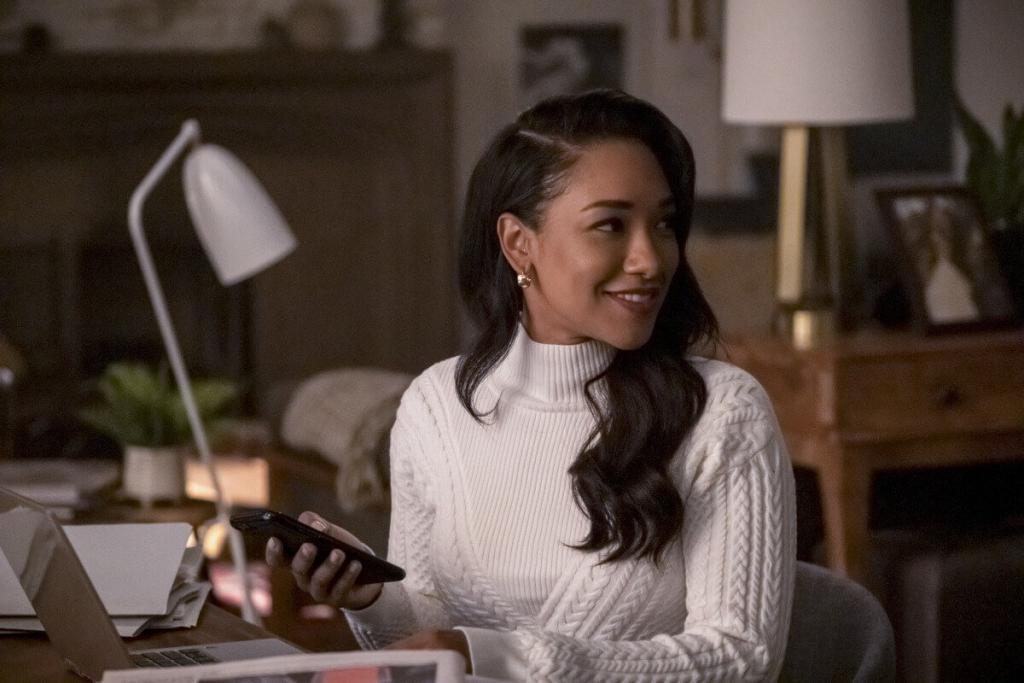 Iris, so gung-ho about saving her husband, is now left without a big nuclear-sized catastrophe she has to prevent, but she’s been so traumatized by the loss she almost endured that she’s treating her big news story in “Marathon” the same way. Instead of taking her time to unravel the conspiracy behind Black Hole (which isn’t exactly the coolest evil organization name, but they can’t all be SPECTRE, I guess), she wants to blow the whole thing wide open right away. In doing so, she gets herself found out and targeted by one of the bigwigs in the cabal. It takes a pep talk from Joe – who also almost lost one of the people he loves the most – to make her realize that, like Barry, she needs to live day to day once again instead of turning everything into the next Crisis, to slowly put the pieces of the Black Hole mystery together instead of trying to get them all in one fell swoop. And in arranging for a smaller victory, she’s able to save her friends. But when she figures out another clue at the end of “Marathon,” she goes full tilt again and gets herself kidnapped by a magical mirror person, indicating that overcoming the Crisis mentality is a process, and there are bound to be some relapses. (I was also relieved that the “mirror” clue didn’t actually mean to look at the door number in a mirror because that would have been one of the dumbest plot points ever.) Iris’ plot is also the setup for the rest of the season, as Black Hole is clearly going to be the big threat now that Bloodwork and Crisis are in the rearview mirror.

Then, there’s Cisco, who’s been chronicling the many changes made to the one remaining Earth in the wake of Crisis, and he’s less than thrilled. The merging of the different worlds means that a lot of the villains they’ve long ago defeated are back, “with fresh paint jobs.” On a more personal note for him, it means that the many versions of Harrison Wells are gone, including his good friend from Earth-2. This is crucial, as it puts a human face on the ramifications of Crisis, and one that’s important to the audience. One of the hallmarks of The Flash has been the many versions of Harrison Wells that Tom Cavanagh has played over the years (aside from that stupid Council of Wells that was better in theory than in practice), but that’s all gone now, and like Cisco in “Marathon,” we’re left with the one we know – and, by extension, like – the least, Nash (although, presumably, Eobard Thawne is still around, and could wear Wells’ face once again). Cisco was also the perfect character through whom to do this because he is the audience surrogate; his displeasure with Crisis mirrors our own, and our loss of characters like Earth-2 Wells is felt all the more because he feels it too. Moreover, Cisco’s Vibe powers – if he still had them – would be meaningless now that there are no other worlds to and from which to vibe. His initial reaction is to lash out in anger at Nash, but he eventually decides to work through his grief by trusting him. This represents Cisco making the best of his new circumstances; he lost his old friend, so he puts his trust in Nash in the hopes that he’ll make a new one, learning to live like Barry and Iris are. It looks like Cisco will be taking a leave of absence (that had better be temporary), and while he’ll be missed, I’m looking forward to seeing Nash come into his own. 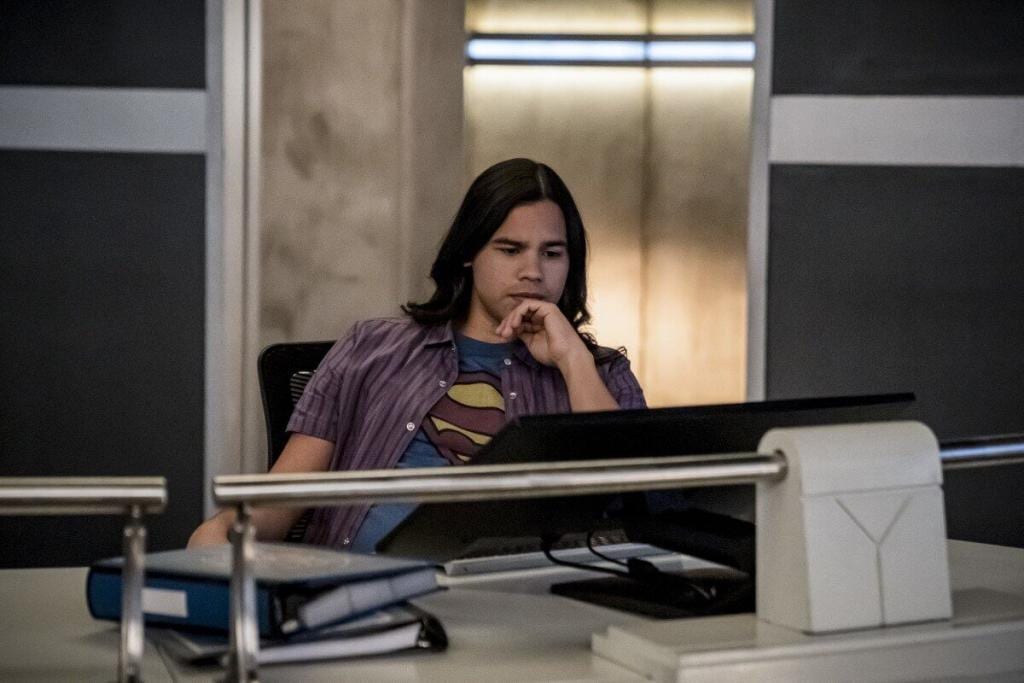 “Marathon” doesn’t sound like a particularly great episode, and while it isn’t one of the series’ best, it’s much better than you’d guess. Barry takes a back seat for Iris this time, but it works because her plot is interesting, and Candice Patton is wonderful, highlighting both Iris’ determination and her love for her friends. Grant Gustin is also great, as always, never overplaying the obvious pain Barry feels, nor the guilt at Oliver taking on the sacrifice that fate determined was his. Carlos Valdes is heartbreaking when he shows Cisco’s grief at all he’s lost, continuing to be the friend we all want. And while “Marathon” isn’t exactly a comedy showcase for The Flash, I laughed out loud at the t-shirt gag in the beginning. On the other hand, I still find Iris’ assistants, Kamilla and Allegra, dull, and I really hope Joseph Carver is just one cog in the Black Hole machine because he’s less than impressive as the face of the big evil. And, despite them making a resonant story point out of it, losing all the Wells doppelgangers is a real bummer. In fact, the merging of all the Earths is a detriment to the Arrowverse as a whole, making this huge sci-fi multiverse much smaller than it once was, and much less interesting. And since they established that the DCEU is one of the Earths, how does that even work?

A weak villain, two boring supporting characters, and the drawbacks of “Crisis on Infinite Earths” aside, “Marathon” is a good episode, and a smart way to introduce the future of The Flash. Things should get very interesting from here on, and I’m looking forward to seeing where the story goes now.