“Sanctuary” opens on a group of village women fishing while their children play. They’re soon attacked and forced to flee. One mother hides herself and her son under a basket and manages to go unseen. Meanwhile, the Mandalorian and “Baby Yoda” arrive on a new planet and head to a tavern for food. The Mandalorian steps outside and finds a female bounty hunter named Cara, who kicks his butt. She tells him to move on, as she was here first. As he’s loading his ship, some farmers beg for his help. He enlists Cara, and they, along with “Baby Yoda,” ride along with their new clients. While the baby plays with a local child, the Mandalorian talks with the mother about the Mandalorian way.

As they investigate, the bounty hunters discover AT-ST tracks. They confront the farmers about this, telling them that the only option is to leave. The farmers insist on standing up and fighting, so the hunters show them the way. The two then set out alone and attack the thieves who earlier besieged the farmers. They lead the machine back to the village, and both sides exchange fire. Cara shoots the AT-ST, and it lands in the marsh. The thieves run away. Mando is considering leaving the child with the village when Cara asks why he doesn’t just stay with the woman, a sentiment she echoes. However, he isn’t ready to leave his lifestyle, simply saying he doesn’t belong here. As he’s packing his possessions and preparing to leave, Cara kills another to stop him from shooting the child. Seeing that the baby will never really be safe anywhere, the Mandalorian takes him along after all. 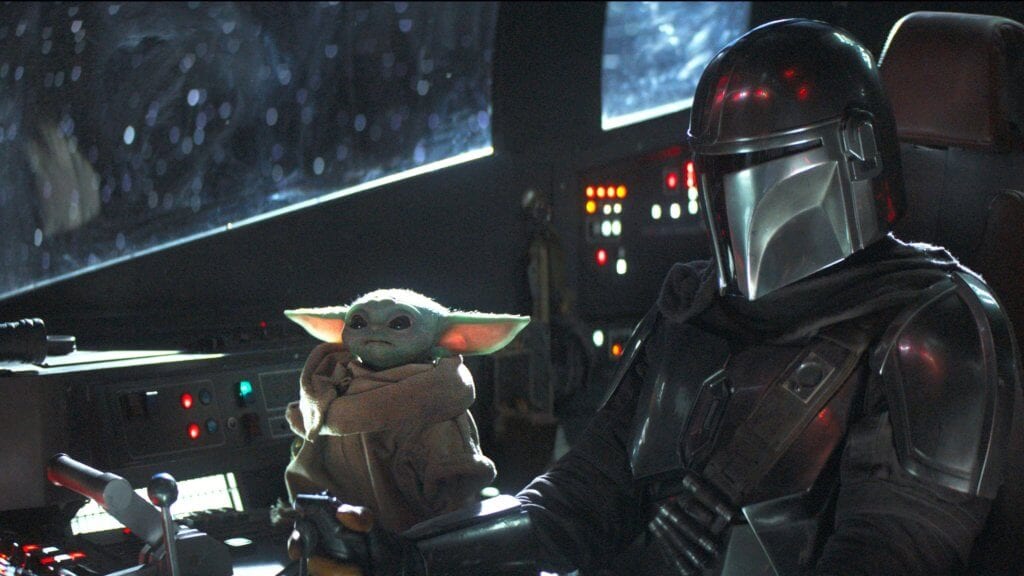 Virginia: I really love the whole mood “Sanctuary” creates and how it entices the title character (and “Baby Yoda”) with a better life. This episode really feels like an old Western, with Mando and Cara agreeing to help the village fight off this colossal threat. I really liked the chemistry between Mando and Cara, as well as the former and the widowed farmer woman. His sense of responsibility for “Baby Yoda” is sweet and interesting too.

Munir: More than a Western, I think it borrows heavily from samurai movies and shows (which also influenced the Western). It reminded me of Akira Kurosawa’s Seven Samurai in particular. This movie is so influential that there are countless films and TV shows that have derived from it; The Magnificent Seven and A Bug’s Life, to name a few. In it, terrorized villagers pay some outlaws to help them fight against the band that is terrorizing them. “Sanctuary” channels this and puts it in intergalactic space, but the premise remains the same. Even so, this episode is my favorite so far. It has action, character development, and drama. It also introduced an excellent character, Cara Dune (played by Gina Carano), who had great chemistry with Mando. I hope we can see more of her in the future.

V: I feel like she is likely to become a recurring character because she’s given a name and was heavily featured in the show’s promotional material. I also found her interesting and likable. I like how “Sanctuary” starts with the widowed farmer and sort of follows her throughout as well as Mando.

M: I certainly hope so. Now that we’ve reached the season’s halfway mark, I think we’ve been introduced to the main players and the central plight, which is to get “Baby Yoda” to safety. What I liked most about “Sanctuary” is that it made me care for Mando more. As you know, one of my main issues in the first episodes was that I couldn’t relate to him, but now that things are becoming clearer and his motivations better defined, I can say he’s becoming a great character. The widow woman was also a great character and served as a “What If?” moment for Mando that was played up well. I liked how he let his guard down to the point that he was going to let her see his face, something that nobody has done in a long time, and that goes against the Mandalorian code. In lesser hands, their whole story would’ve felt rushed, but Bryce Dallas Howard (with Favreau’s script) made the most of them in a short time, so that it was believable for them to bond.

V: “Sanctuary” is the longest chapter yet, clocking in at 41 minutes, and I’m glad. I think this difference can be appreciated in the big battle with the AT-ST, as well as smaller moments with Mando and the widow woman. We also see in “Sanctuary” just what a sad life “Baby Yoda” is liable to have. He’ll never really be safe because the hunters will find him no matter where Mando takes him.

M: Exactly. Mando has the realization that the only way to keep Baby Yoda safe is to keep it with him. And that means they are going to be on the run for a long time. Another thing I liked is Cara’s back story. She was a Rebellion fighter, but then she left when the New Republic was founded. It tells a little bit of what happened after the events of Return of the Jedi. It’s also a glimpse of how and when the First Order was born, leading to the events of The Force Awakens. Now that we’ve seen the first half of the season, do you think the remaining four episodes will move things ahead or still lay new ideas and introduce new characters? 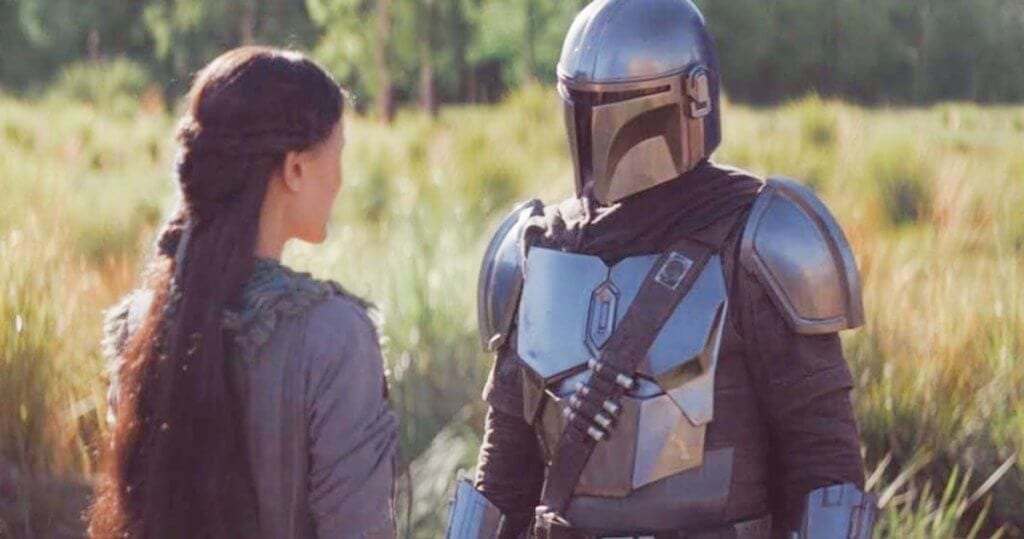 V: I would imagine that the second half of season two will tie up the storylines thus far set up. However, it’s possible this season’s plotline will continue into season two rather than wrap up the loose ends by season one’s end. Really, I’m just hoping we see more of certain characters, like Cara and the Client.

M: Completely agree. Those two are easily the best characters, aside from Mando and “Baby Yoda,” and I would also like to see more of them in what’s left of the season. I really thought that Cara was going to join them by the end, but she left, which was both intriguing and disappointing. I also don’t expect that all the loose ends will get resolved by the season finale, but I do believe that many things will get clearer and that we are not in an endless “laying the foundation” thing.

V: I was also somewhat surprised by her decision to stay there. Earlier in “Sanctuary,” it was established that Cara came here to work, but I really felt like she was going to join the main character as the episode went on. However, I also thought Kuill was going to join him at one point. I guess I’m just a sucker for team-ups.

M: Me and you both. Overall, “Sanctuary” was a great episode, paying homage to one of the best movies ever made while creating an action-filled episode full of great character moments. I certainly can’t wait to see what happens next!

What did you think of “Sanctuary”? Let us know in the comments, and don’t forget to come back for more reviews of The Mandalorian!