Welcome back to You Should Be Watching, where I recommend an underrated movie or show weekly. This week, we’re visiting a fantasy land with Rankin/Bass’ animated interpretation of Peter S. Beagle’s The Last Unicorn.  I grew up with the famous Rankin/Bass stop-motion Christmas specials like Santa Claus is Comin’ To Town and The Year Without A Santa Claus, but only as an adult did I discover that not all of their films were about the holidays. The Last Unicorn was a co-production with the British distribution company ITC Entertainment and was animated by Japanese studio Top Craft, possibly best known for animating Nausicaä and the Valley of the Wind for Hayao Miyazaki. In fact, Top Craft’s heads went on to form Studio Ghibli with Miyazaki. According to Beagle, several production companies expressed interest in adapting his book, but he was set on going with animation. He was initially displeased with Rankin/Bass as his producer’s choice, but the film’s art design and performances proved to be satisfactory.

The Last Unicorn is the story of a unicorn who discovers that she’s the last of her kind. She decides to leave the relative safety of her enchanted forest to seek out the others of her species and free them. Along the way, she encounters wizards, fellow mythological creatures, a wicked king, and his evil Red Bull. She gets transformed into a human to better protect her identity, and as a consequence learns the meaning of love, as well as regret. It’s a story about magic, beauty, power and heroism. I first heard about and saw this movie thanks to a friend who loaned me the DVD in high school. This film has a very unique art style that doesn’t really remind me of much else, aside from a couple of human characters that resemble other Rankin/Bass characters from The Hobbit and their stop-motion stuff. Although The Last Unicorn was animated in Japan, it doesn’t look much like what I normally think of as anime; that being said, it doesn’t exactly scream Disney or Warner Bros. either. There’s also a great deal of intricacy to the film’s backgrounds, and the opening credits are absolutely gorgeous. The fact that the film looks so unlike any other I’ve seen serves to help establish this world as fantastical and different from ours.

The original songs in The Last Unicorn are written by Jimmy Webb and performed both by the film’s cast and pop-rock band America. Webb also provides the musical score, which is serviceable but not amazing. However, I quite like the songs, with the exception of “Now That I’m a Woman.” The lyrics to this one are a little too obvious and bland for me, and Mia Farrow sounds like a cow that’s simultaneously dying and having labor pains. In fact, she’s pretty terrible in “That’s All I’ve got to Say” as well, but Jeff Bridges is good, and that song is considerably better. I love a song in a musical that gives you more than one character’s perspective, and I love Bridges and Farrow’s characters’ parts here, even if the latter sounds like a whale trying to speak Chinese. “The Last Unicorn,” “Man’s Road,” and “In the Sea,” all performed by America, are great and set the whimsical but somewhat alien tone of the film. 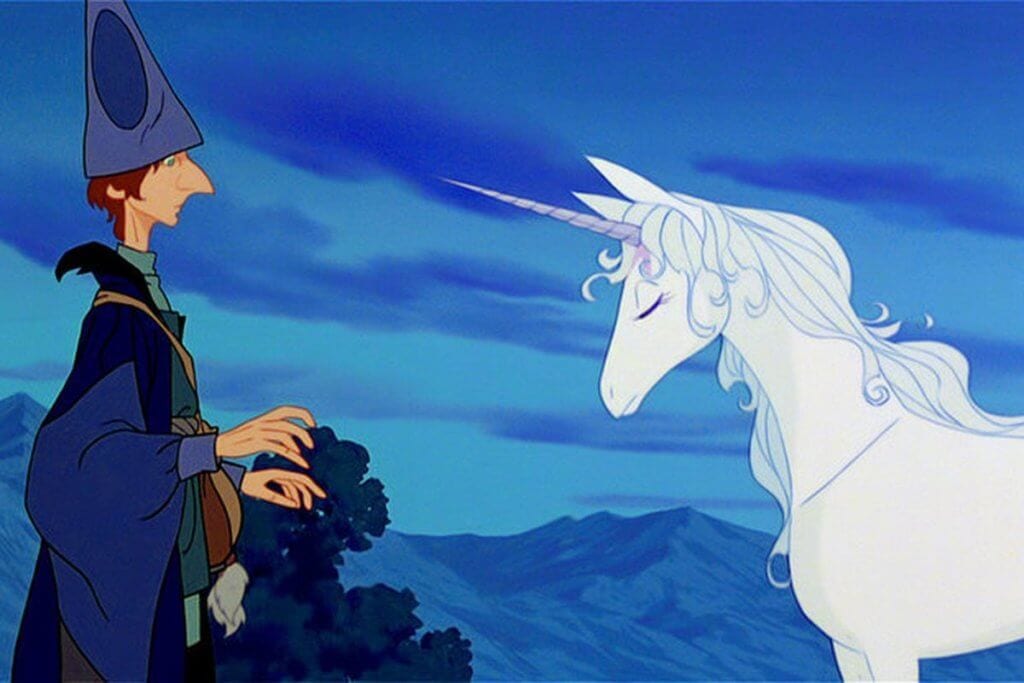 The vocal performances in The Last Unicorn range from amazing to soulless and everything in-between, and unfortunately, Mia Farrow is again probably the worst actor here. Her speaking voice is almost as annoying as her singing voice, but to add insult to injury, she just doesn’t bring anything interesting to her character – and since she plays the lead, that is a real shame. She sounds whiny at times, but not in a sympathetic way, and she doesn’t succeed at conveying the unicorn/Amalthea’s desire to save her kin. I consider this to be a likable and sympathetic character whose actions denote bravery and passion, but Farrow is lousy, and that’s worth talking about. However, her co-stars more than make up for her failings. Alan Arkin voices bumbling magician Schmendrick, and he’s great. He’s funny, pitiful, and one of the film’s more charming characters. Jeff Bridges voices Prince Lir, and he’s pretty good, imbuing his role with more emotion in less screen-time than Farrow does, and she’s in the whole movie! His love for Amalthea and eventual disgust with his father are palpable. Tammy Grimes voices Molly Grue, a woman who joins Amalthea and Schmendrick on their quest so that she can escape her husband, and because she always wanted to be visited by a unicorn as a young girl. I don’t like how Molly snaps at Schmendrick a couple of times throughout the film, but otherwise, she’s a tragic character with a fun personality. Angela Lansbury portrays Mommy Fortuna, a charlatan witch and enslaver of mythical creatures that Amalthea and Schmendrick encounter early on in the story. I’ll say this much: Mrs. Potts she ain’t. Lansbury does a great job in this small role, bringing a threatening and condescending presence to contrast with Schmendrick’s inexperience and Amalthea’s naiveté and selflessness. There are too many performers to name them all, but Christopher Lee as King Haggard can’t go without mention; Lee arrived to record his lines with a copy of Beagle’s book, with notes throughout of details the filmmakers simply had to include. He later cited this as one of his favorite films he appeared in, and Arkin as one of his favorite co-stars. Much like Lansbury, he poses a significant threat, but with much more at stake. His character is also more complex than hers, being the film’s main antagonist. The only wish I have here is that we knew more about his relationship with his son Lir, but that’s nothing against Lee’s fantastic vocal performance.

The Last Unicorn isn’t the kind of thing I ever thought I’d be recommending. Don’t get me wrong, I love animated fantasy musicals, but even in that category this film is something of an odd duck. The animation is completely unlike anything I’ve seen in any other movie or series, the dialogue is whimsical – and, at times, very deep and abstract – and the music is quite unusual as well. The film is somewhat hindered by a terrible performance from Farrow and one skippable song, but otherwise, it’s a great adventure to take with lovable characters and an inspired aesthetic. The film’s visuals, music and cast are why you should be watching The Last Unicorn.

The Last Unicorn is free to watch on Amazon Prime, and you can order the Blu-Ray for about $15.