I’ve always been enamored with stories of Tinseltown, particularly of old Hollywood. Whether it’s things like Entourage or Once Upon a Time… in Hollywood, they’re always presented as stories of following your dreams and triumphing over impossible odds. So, when it was announced that Ryan Murphy would be bringing a new vision of post-war Hollywood to Netflix, I was intrigued. Add in the fact that some of my favorite actors, such as Darren Criss, Laura Harrier, and Jim Parsons, were involved with the production, and I had to check it out. So, does Hollywood get the green light? Let’s find out.

Hollywood opens with David Corenswet’s Jack Castello sitting in a movie theater as an announcer expounds on the Hollywood dream that everyone comes to the town to achieve. Every day, he jostles with the rest of the Hollywood hopefuls for extra work, only to get turned down every time, thus making it next to impossible to provide for his pregnant wife. Things start to change for Jack when he meets Ernie West, a former aspiring actor who owns the Golden Tip gas station, which doubles as a prostitution ring. When Jack refuses to service a man, Ernie demands that he “go out a find someone who can,” which leads him to Jeremy Pope’s Archie Goodwin, who’s had his screenplay, Peg, brought by Ace Pictures. As Jack’s luck slowly begins to turn around, we meet Raymond Ainsley, who’s looking to make a film with Anna May Wong. Ace’s president refuses to let him make the film but invites him to look through some of the scripts they’ve received, which, of course, leads him to Peg, or, as it is later called, Meg. Threaded through all of this is Rock Hudson, Archie’s boyfriend, who is picked up by Jim Parsons’s Henry Willson in the hopes of making him a star, and Laura Harrier’s Camille Washington, Ainsley’s girlfriend and, more importantly, a contract player with Ace who aspires to be the next woman of color to win an Academy Award, this time for a leading role. At Camille’s request, Ainsley decides to change the lead from a white woman to a woman of color, sparking a revolution in the film industry, to the chagrin of many. 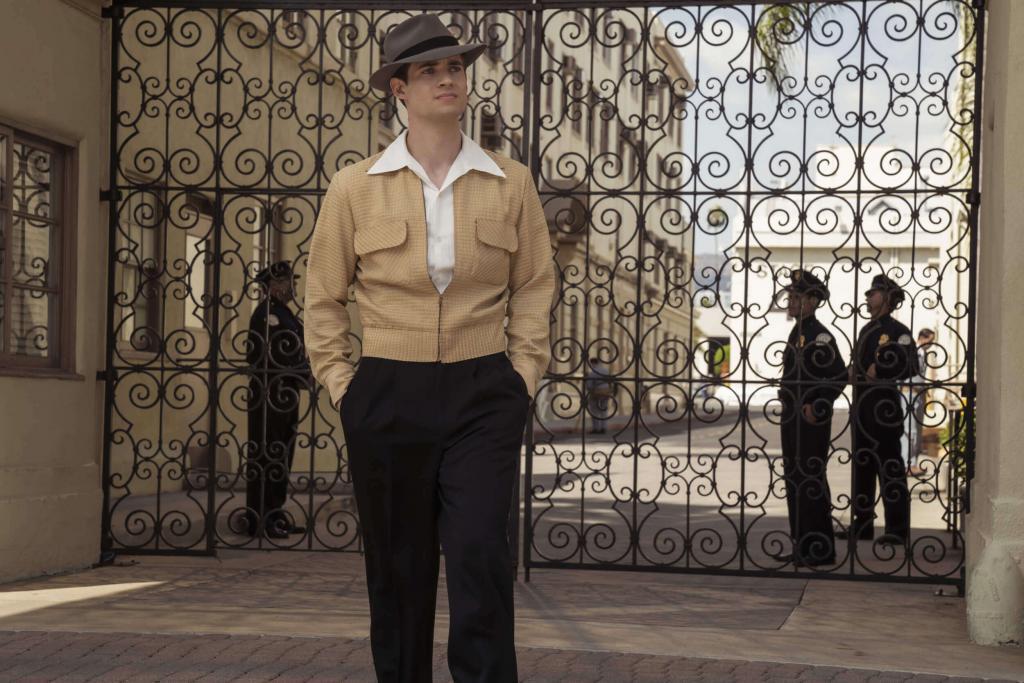 Much like Quentin Tarantino’s ninth film, Murphy and co. present an idealized vision of the industry, one that, in a just world, would’ve been a reality in the 40s. There’s a lot to like here, particularly when it comes to the production design. The fact that it was filmed in Hollywood oddly helps to draw the viewer into this heightened reality. As Murphy has shown in his work on Feud, he knows this world like the back of his hand, having grown up on the stories of the Golden Age. In some ways, Hollywood feels like a companion piece to Feud, each one informing its era. They almost serve as mirror images, one showcasing the perils of ageism in the industry while the other prefers to embrace the more doe-eyed vision of what Hollywood can be and wrapping in an incurrent social commentary, At times, Hollywood has some potent things to say about race relations. Yet, from the moment the miniseries opens, you can predict nearly every moment in to follow, including the big finish. While this ending is supposed to be an uplifting, feel-good fairy tale, it only feels hollow. Being on Netflix should be freeing for Murphy, so it disappointing that the story goes through the motions with little regard for the cache of narrative potential at his disposal.

Despite this predictability, many of the performances are exemplary. David Corenswet does an excellent job as Castello, embodying all the qualities of a 1940s leading man as he reconciles his responsibilities as a family man and his desire to be a Hollywood leading man. At turns earnest and ambitious, this is a breakout role for him. Darren Criss and Jeremy Pope are wonderful too. Criss brings a mixture of naivety and ambition that suits the character well, embodying the timeless creative spirit that every filmmaker worth their salt possesses, along with the belief in the power of cinema. Pope transitions from Broadway to streaming wonderfully here. It was inspiring to watch as Archie reconciled the Hollywood machine with what was right for him as an artist as he came to the forefront of a sea change in the land where dreams come true. Going forward, Pope is definitely one to watch, and I can’t wait to see what he’s going to do next. Perhaps one of the most intriguing performances was that of Jim Parsons as Willson, who was a real agent at that time. While it can be hard for an actor to break out of an iconic role like that of The Big Bang Theory’s Sheldon Cooper, I’d say Parsons has done just that. He delivers to us a portrait of a man caught up in his own power, believing people are a means to an end, only to realize the error of his ways. I don’t envy the places Parsons must’ve had to go mentally to find this character, but I’m glad he did, as Hollywood is far better for it.

Special mention must go to Laura Harrier, who is absolutely fantastic as Camille. I’ve been following Ms. Harrier since her time on One Life to Live, so when I saw her in Spider-Man: Homecoming as Liz, I was pretty let down and thought they did her tremendous talent a disservice. When she was cast in Hollywood, I was hopeful that the writers and producers would do right by her. I’m thrilled to say that I wasn’t disappointed. At times understated, yet forceful when necessary, Ms. Harrier showcases Camille’s ambition while never compromising the character’s integrity, almost serving as a juxtaposition to Jack as he briefly succumbs to the decay of Hollywood. In the hands of a lesser actress, the role could have been one-note, but Ms. Harrier’s dynamic range allows for a nuanced performance. Here’s hoping we now get to see more of her in the future.

Despite its idealized, paint-by-numbers plot, Hollywood is, for the most part, a fun trip to the Tinseltown of yesteryear. With excellent performances and superb production design, this could be worthy of a return trip down the road.