When Penny Dreadful: City of Angels was announced, I wasn’t exactly thrilled. The original Penny Dreadful quickly became one of my favorite T.V. series during its first two seasons. Sadly, like most die-hard fans of the show, I was appalled by the series finale and where it took some of my favorite characters. I’ve never been a big horror fan; as such, for a horror show to draw me in with unique storytelling and likable characters, only to devolve into lazy, unearned genre tropes in the finale hurt a lot. Potentially exciting set-ups and unresolved character relationships were left hanging in lieu of shock value and a rushed, unsatisfying conclusion that came too early. Only telling people the show was over after the finale aired probably didn’t help matters. Regardless, the show’s title being attached to an unrelated story with a new cast didn’t exactly excite me; the characters, atmosphere, and story we loved would be replaced with something totally different. I also tend to find American settings less exciting and mysterious (go figure) than the first show’s Victorian setting, not to mention my boredom with political posturing and race bait. This being said, the sequel (?) series is penned by John Logan, who created the original show, and I like a lot of the cast, so I am going to give it a fair shake. Let’s have a look.

Season one of the Penny Dreadful spin-off begins in a vineyard. Magda (Natalie Dormer) kills everyone save a little boy and one man, giving the souls to Santa Muerte (Lorena Izzo). The boy tries to run to his father, but Santa Muerte pushes him away. In 1938, the boy, Tiago Vega, is now a man and becomes a police officer. The next morning, his partner, Lewis Michener (Nathan Lane), calls him and says to report in 15 minutes. They arrive at a crime scene, and the dead people’s faces have been cut to look like Day of the Dead skulls. Their hearts have been removed as well, and an inscription in Spanish translates to “If you take our heart, we take yours.” Meanwhile, Tiago’s mother is working as a maid for Peter Craft (Rory Kinnear,) who asks her to make sure his wife doesn’t drink while he’s out. Meanwhile, the police chief (Brent Spiner) tells Michener and Tiago that the bodies were identified as a wealthy, white family. He fears that the news could start a race war, but Tiago isn’t so sure it was Mexicans who killed them despite the evidence. Dr. Craft sees a patient, a little boy whose mother is Magda in disguise. She tells him about difficulties with her marriage and that her son is abused by her husband. Things get awkward and she leaves. Once she’s alone in the elevator, Magda absorbs the boy. Tiago’s older brother defends his people in a town meeting in which plans to build a road through their town are on the table. All Latinos are escorted out. The Councilman is encouraged on this path by another of Madga’s alter egos. Dr. Craft leads a Nazi demonstration and gives a speech saying that America should stay out of Europe’s war. The Councilman meets with a Nazi, and they discuss having him build the roadway. 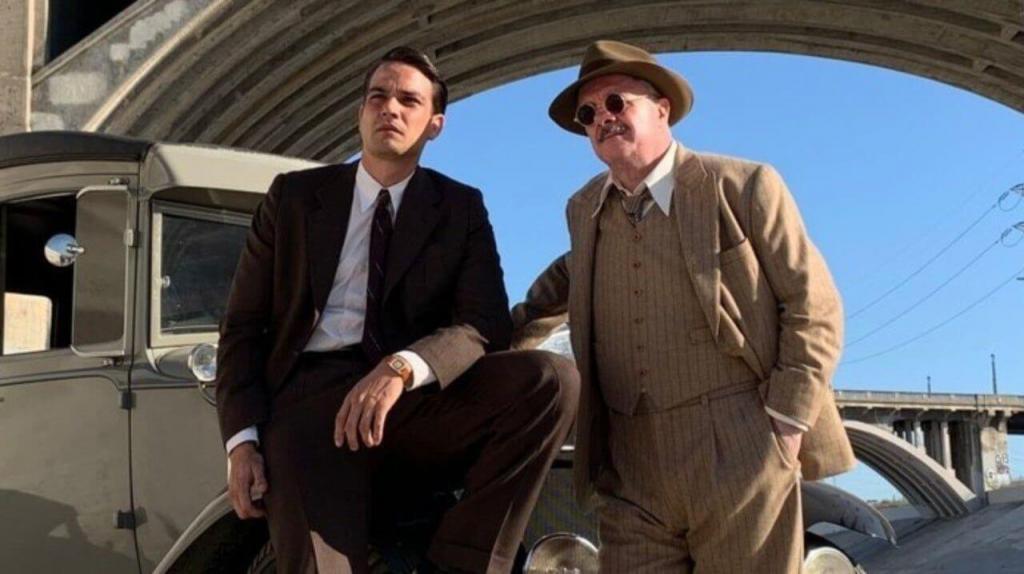 Meanwhile, Tiago asks his mother to keep an eye out for any rituals involving Santa Muerte, and she berates him for not believing in the “holy angel.” Tiago tries to convince his younger brother to stay out of the conflict over the roadway, but their oldest brother has other ideas. Michener is investigating the Nazis in America when Tiago arrives. He tells him he can’t come into work tomorrow, as doing so would set him at odds with his people and family. Santa Muerte appears to Tiago’s mother in response to her prayers. She begs the angel for help and leaves the conversation believing that Tiago must be present at the riot, that he’s been chosen. At the riot, Magda whispers in a policeman’s ear, and he shoots one of the rioters dead. A huge fight breaks out between the rioters and the police. Tiago is forced to kill his older brother Raoul to save his partner. 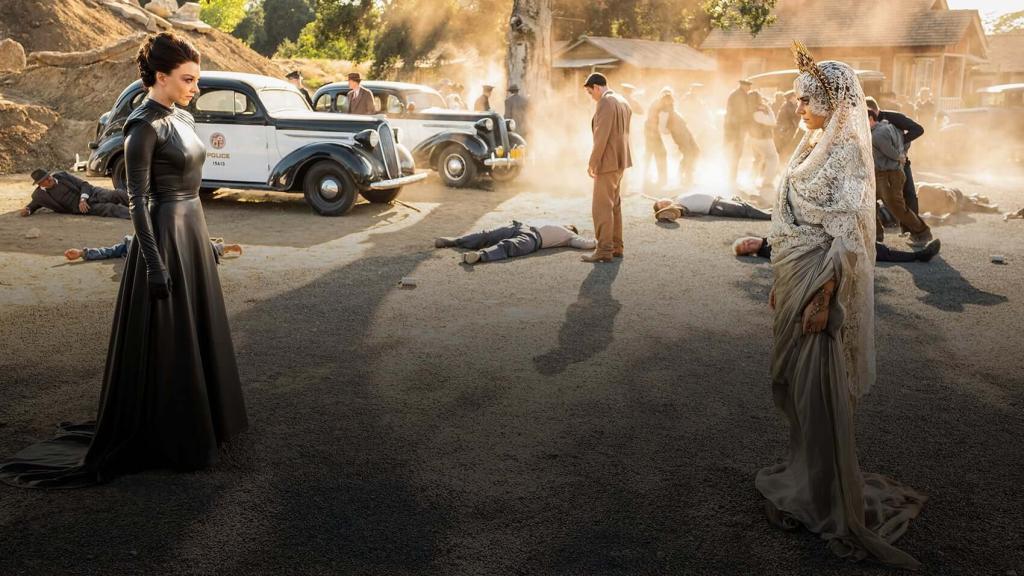 While I still don’t understand the necessity to tie this in with the existing property’s title, there is a lot to like about City of Angels. While I don’t personally know that much about Mexican culture, I do find it interesting. I like little touches like using the tune of “La Llorona” as a leitmotif throughout the episode. I first heard the folk song in Coco, although the context here is, of course, wildly different. Tiago’s dynamic with his family is one of the best parts of the episode, and I would have liked more about that and less about the race war and Nazis in America. I also like the idea of the two sisters, demon Magda and angel Santa Muerte. Santa Muerte’s appearance is very cool, although, at times, she stretched my suspense of disbelief, mainly because of how she was presented. It’s strange how we can see the vineyard workers and her in all her regalia in the same shot. I feel like they could have filmed her differently to heighten her effect, but this is probably a nitpick. It’s interesting how humans like Tiago’s mother misunderstand her purpose and pray to her for help. She states twice in the episode that she’s only interested in the dead, yet Tiago tells us that there are segments of L.A.’s Hispanic population who pray to her as part of an obscure religion. I’m interested to see how her dynamic with her “sister” plays out. In the beginning, Santa Muerte shows no sympathy for the humans Madga burns alive. However, the two mysterious forces stand diametrically opposed. It seems like Tiago’s mother and her prayers may have had some effect after all.

I will say, though, that his brother activist Raul got on my nerves throughout the episode. While I understand the story and character significance of Tiago being forced to kill his own brother, I personally didn’t feel sad that it happened that way. It’s frustrating because I understand that Raul feels his people are being mistreated and marginalized, but throughout the episode, it felt to me like he was simply making things harder for his people, the police, and, most of all, his brother who belongs to both groups. I like the notion of the demon Magda manipulating and controlling people to get her desired results. However, at least so far, it feels like she exerts a little too much power. This may just be an issue of presentation, similar to what I said about Santa Muerte. If spirits are going to influence people, they should only be encouraging their own worst instincts, not giving them ideas or forcing them to do things. For example, when Madga caused Raul to kill Tiago’s partner, it felt a little out of character, like he had no agency or choice whatsoever. I also thought Magda’s appearances as Dr. Craft’s client and the Councilman’s assistant were a little on-the-nose, but I like Natalie Dormer and I’m willing to hang on and see how that pans out.

Finally, I really, really didn’t like the political statements in “Santa Muerte.” Whereas Penny Dreadful subtly explored woman’s role in Victorian society and how men exploited them, City of Angels screams from the hilltops about racism, authority, and society as a whole. I’m sure this will work for some, but I prefer any sociopolitical moralization to remain as subtext, rather than comprising the text itself. Penny Dreadful explored the evils of society and the feeling of being marginalized through the eyes of witches, werewolves, and Frankenstein’s monster. I find this more interesting and meaningful than dramatizing events from history and showing how demons were actually at work behind race riots and racial violence. For example, while the original show took place in Victorian London, Frankenstein never kidnapped the Queen or moonlit as Jack the Ripper. While I found Michener’s comment about Cowboys and Indians interesting, all the anti-Mexican stuff and the presence of literal Nazis pushes it over the top. I’m still interested enough to keep watching. Seriously, though, they may as well give the Councilman, Dr. Craft, etc. eyepatches and twirly mustaches. The cartoonish evil of the villains clashes with the tone they’re going for. 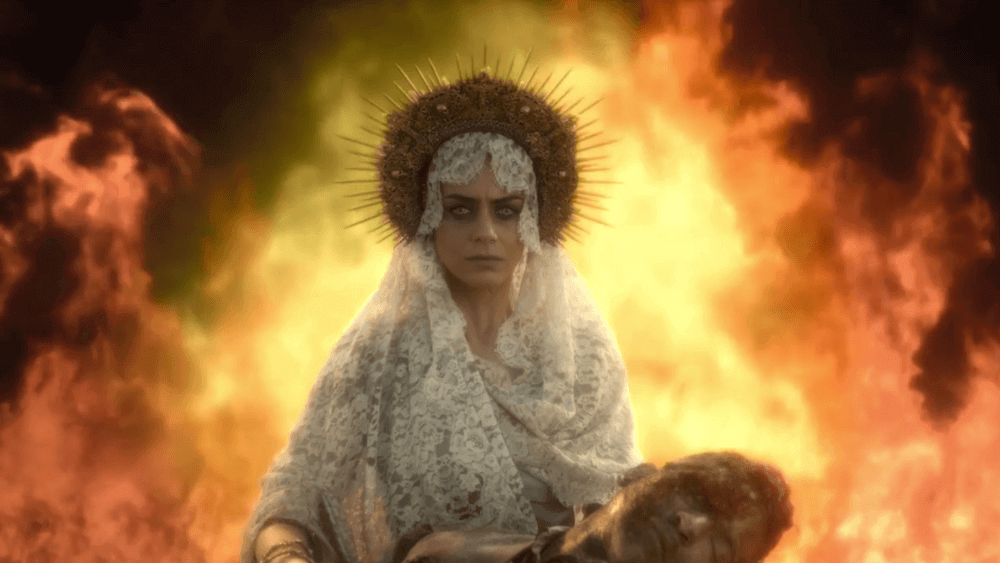 Overall, “Santa Muerte” is a decent series premiere. I think City of Angels would have benefited from being its own thing rather than a spin-off of a cult show that ended badly, but it does have some interesting ideas of its own. I look forward to seeing where the storyline goes. However, I hope certain topics are handled with a little more finesse going forward.