When Toy Story 4 was announced, I was not exactly thrilled. The Toy Story movies are very close to my heart; until The Incredibles came out in 2004, the first and second Toy Story films were my favorite movies ever. I consider Toy Story 2 one of the best sequels of all time and a master class in theme and character development in its own right. I have my nitpicks with the third film, which I find to be a touch overpraised, but overall, I consider it to be a solid ending to the trilogy. And let’s be real; it was meant as an ending. Those last few moments were a slow, sweet farewell to characters that many of us grew up with. The evolution of the series’ themes and character motivations is dramatic, yet the films fit together so well it’s easy to forget that the original is a breezy 80-minute comedy. I was displeased with the announcement of yet another installment because Toy Story 3 seemingly left no questions unanswered, no plot threads hanging. Let’s see how the newest film fares.

Toy Story 4’s score by Randy Newman is just another Toy Story soundtrack, but I’m OK with that. However, the song “I Can’t Let You Throw Yourself Away” is a little too on-the-nose for me, and not as much fun as his other songs for the series. After a certain point, it feels redundant to even talk about the quality of Pixar’s animation. That being said, Toy Story 4 is a wonder to behold. Colors and light sources pop off the screen, and textures from plastic to fabric look incredible. I do have one nitpick with the visuals, relating specifically to character design. It has always bothered me how, in almost every Toy Story movie, Andy looks like a completely different kid. He’s pretty much the same from the first movie to the second, but completely unrecognizable in 3’s flashbacks, and again different in 4’s flashbacks. Obviously, animation technology goes through huge advancements every year, but the characters should still look like the same people. Most of the toys’ designs have remained faithful, but Bo Peep looks very different here than she did in Toy Story or Toy Story 2. And I’m not talking about her clothing; her face is bigger and rounder, with higher, larger eyes. This issue was also present in the character of Tony Rydinger in last year’s Incredibles 2. I realize that this probably amounts to nitpicking, but I find it troublesome and distracting; the look and feel of films within the same series/franchise should have some sense of consistency. 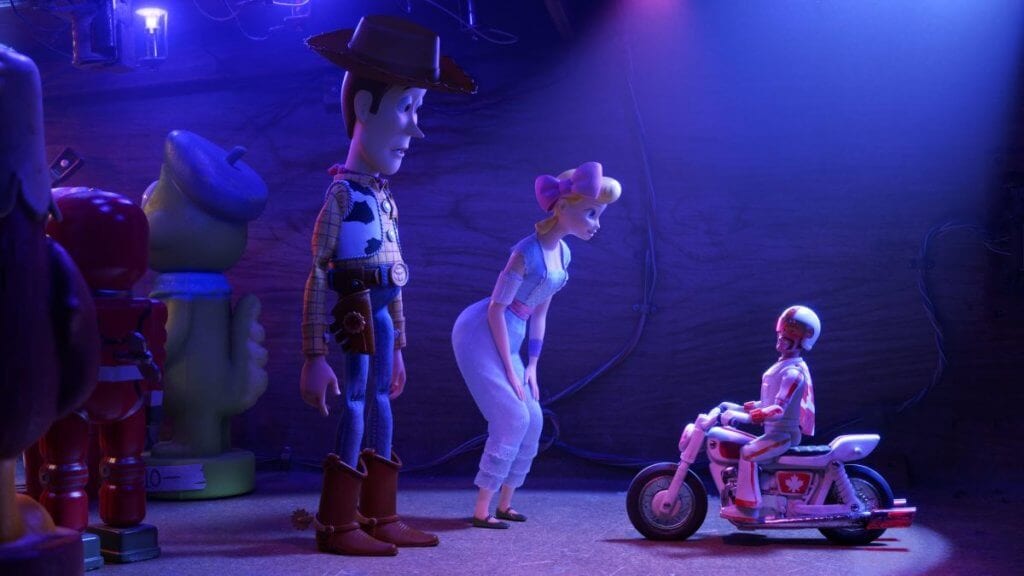 And the look of these characters in Toy Story 4 isn’t the only aspect that feels off. The characters of Bo Peep and Buzz Lightyear feel drastically different here than in previous installments. They manage to regress Buzz as a character, turn him into a joke (and not a very funny one), and push him to the side all over the course of one film. I’m not sure how or why they decided to do this, but I don’t like it. It’s also telling that this series has been built on the friendship between Buzz and Woody, but 4 is more interested in the love relationship between the latter and his lost paramour. Bo Peep was barely even a character in the first two films, and the third relegated her to one line of dialogue and a sad look from Woody. Personally, this never bothered me much, as she wasn’t one of my favorite characters, and Jessie is a much better female lead. Much of the marketing for Toy Story 4 has featured Bo in the forefront, so I was assuming they would be giving her a new personality in addition to her altered costume. In the new movie, Bo Peep is basically an action hero, leading a small group of lost toys and scavenging for tools and supplies wherever she goes. This actually reminds me of some changes they made to Elizabeth Swann in the third Pirates of the Caribbean film, At World’s End. In both cases, I find it annoying. Bo Peep is completely out of her admittedly already thin character in Toy Story 4, even in the flashback scenes featuring her. I understand that it may not be cool to show her adoration for Woody in 2019 like it was in 1999, but that was basically her defining trait, and honestly, I found it endearing. Although I still wouldn’t like it, it would be better to show that she became a hardened badass due to being lost and alone for years rather than demonstrating that she was always like this and the other movies just lied. Personally, I see no reason to turn Bo Peep into Imperator Furiosa (complete with detachable arm) when we already had Jessie as more of a tough-girl character foil for her. For that matter, Jessie is like an afterthought in this movie, and I don’t like that one bit. On a side note, after the previous films established that toys can be permanently broken and face mortality, Toy Story 4 undermines this concept in more ways than one. We’ll go more in-depth on this and various character observations in a spoiler review next week. 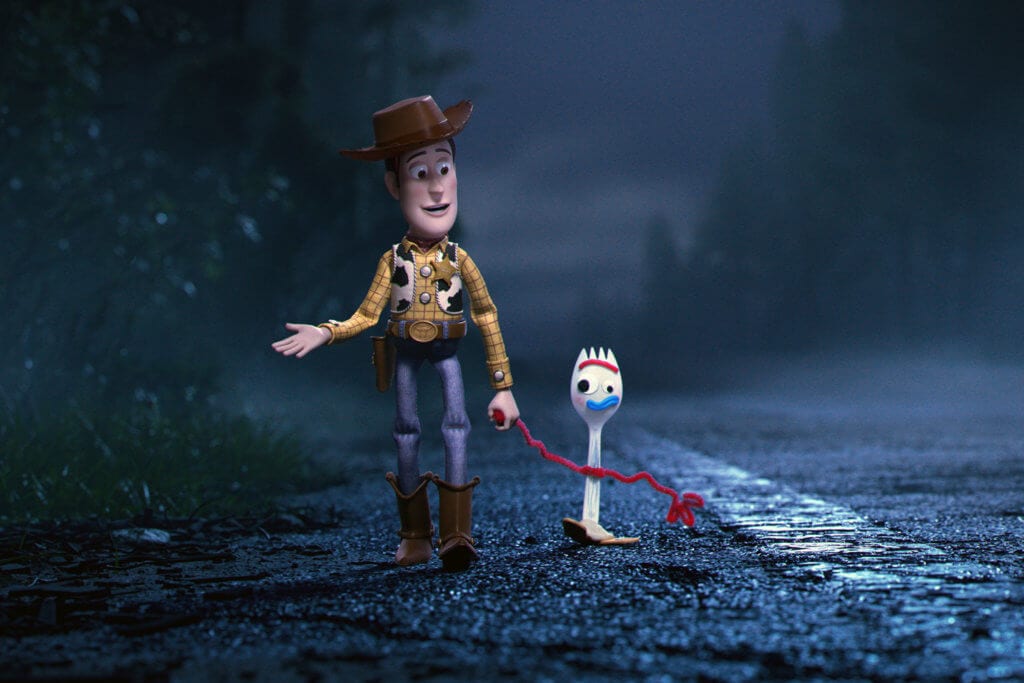 As for the new characters, they’re mostly fine. Keanu Reeves’ Duke Caboom is a lot of fun and provides some of the film’s biggest laughs. Personally I found Tony Hale’s Forky grating and overused, but kids and other adults in the theater seemed to like him. It is worthy of note that his character introduces the rare new idea to the franchise. The notion of homemade toys gaining sentience is genuinely interesting, though there’s only so much you can do with that in a film like this. Toy Story 4 also explores the concept of becoming useless, and while I can appreciate this in theory, I very much dislike the ultimate conclusion they come to with it. Keegan-Michael Key and Jordan Peele’s characters, Ducky and Bunny, get a couple of laughs, but overall they add nothing to the story, and their resolution makes no sense given their initial goal. In fact, there are a lot of characters in this film who don’t contribute to the story or theme, and in some cases seem to contradict their initial purpose. As an aside, Mel Brooks voices a couple of lines from one of Bonnie’s old toys, and I just have to wonder why; I have to doubt there’s much crossover between Mel Brooks aficionados and Toy Story fans. Cast staples like Tom Hanks, Tim Allen, and Joan Cusack are every bit as good as you’d expect. I think the age in Annie Potts’ voice is a little too obvious at times, but this also may be just because she hasn’t been in the movies for two decades now, unlike her co-stars.

Overall, Toy Story 4 is a fine movie in all technical aspects. That being said, I don’t like what they did with several major characters. I have no desire to see Toy Story 4 again because its themes are antithetical to those of the previous films.