“You find a glimmer of happiness in this world, there’s always someone who wants to destroy it.”

Welcome back to You Should Be Watching, where I recommend movies and shows that deserve more attention. This week I’ll be looking at Finding Neverland, Marc Forster’s fantastical portrait of J. M. Barrie’s relationship with a struggling family and their influence on his greatest work, Peter Pan, or the Boy Who Wouldn’t Grow Up.

Peter Pan first appeared in one of Barrie’s novels, 1902’s The Little White Bird. The sections featuring him were so popular that they were re-published separately as Peter Pan in Kensington Gardens. Two years later, Barrie would revisit the character, placing him in the lead and creating one of the most beloved stories of all time in the eponymous play. In 1911 the story was re-told by Barrie in novel form, titled Peter and Wendy.

I haven’t seen the play or read the novel version, but I’ve never seen a movie version of Peter Pan I’ve enjoyed. It’s hard to put my finger on it; I don’t have any moral or philosophical objections to the story, I don’t think it’s an inherently boring concept, and the film versions usually have impressive casts and crews. However, I love this adaptation of the true story, exaggerated as it may be (and these true story movies almost always are).

No matter how many times I see Finding Neverland, I’m always overcome with emotion at a few key points. I’m a sucker for a film that centers on platonic friendship, and I love the way the Llewelyn-Davies family need something and Barrie needs something, and they find it in each other. Forster’s movies tend to be sensitive and emotionally intelligent, and Finding Neverland is no exception. The characters all have amazing chemistry, thanks to an excellent cast. 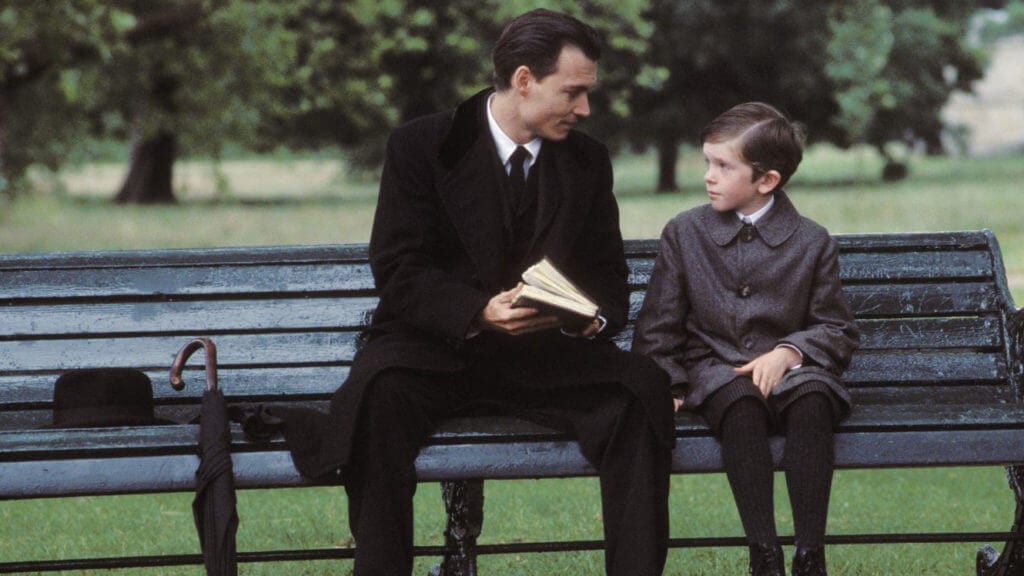 Johnny Depp isn’t just good as J. M. Barrie; he owns the role. This is one of my favorite performances of his because he’s so great and understated, and because it’s so different from the Jack Sparrow type roles in which he gets pigeonholed. When people say Depp always plays crazy characters or isn’t versatile, I wonder if the Pirates and Alice films are all they’ve seen him in, as opposed to movies like Finding Neverland.

Kate Winslet is excellent as Sylvia, and her friendship with Barrie intrigues me. In Finding Neverland, their relationship is chaste and innocent, more about his care for her sons than anything else. Naturally, all of the other adults in the film assume the worst: that Barrie is betraying his wife and Sylvia throwing away all marriage prospects. I like Dustin Hoffman as Barrie’s penny-pinching producer Charles Frohman, though he doesn’t get much to do in this movie. Freddie Highmore shines as Sylvia’s son Peter, the most resistant to Barrie’s affection. The actress playing Peter Pan is portrayed by Kelly Macdonald, known for Boardwalk Empire, Trainspotting and Brave. She brings an endearing charm to her small role.

Finding Neverland is beautifully shot, and visual effects are used sparsely but to great effect. The original score composed by Jan A.P. Kaczmarek and Nick Ingman is beautiful and emotional. The film’s costumes are lovely but believable. I find some period pieces use costumes that seem too ornate to have been worn by “normal people,” even wealthy ones.

I will say there are a couple of moments in Finding Neverland that could come off as sappy, particularly if you’re not as invested in the characters. One thing that always bugs me in movies is when someone dies and their loved ones are told to focus on their memory and it’ll be like they’re still here. They love to do it in these kinds of movies, and this one does it too. I guess people, filmmakers included, use this as a coping mechanism to deal with death, but I find it so strange to comfort yourself by pretending someone you lost is still there. It’s even worse that this is told to a child who’s just lost a parent. This doesn’t reflect too badly on the film, though, and I’ve come to accept that it’s just an idiosyncrasy of mine to find this way of thinking annoying. 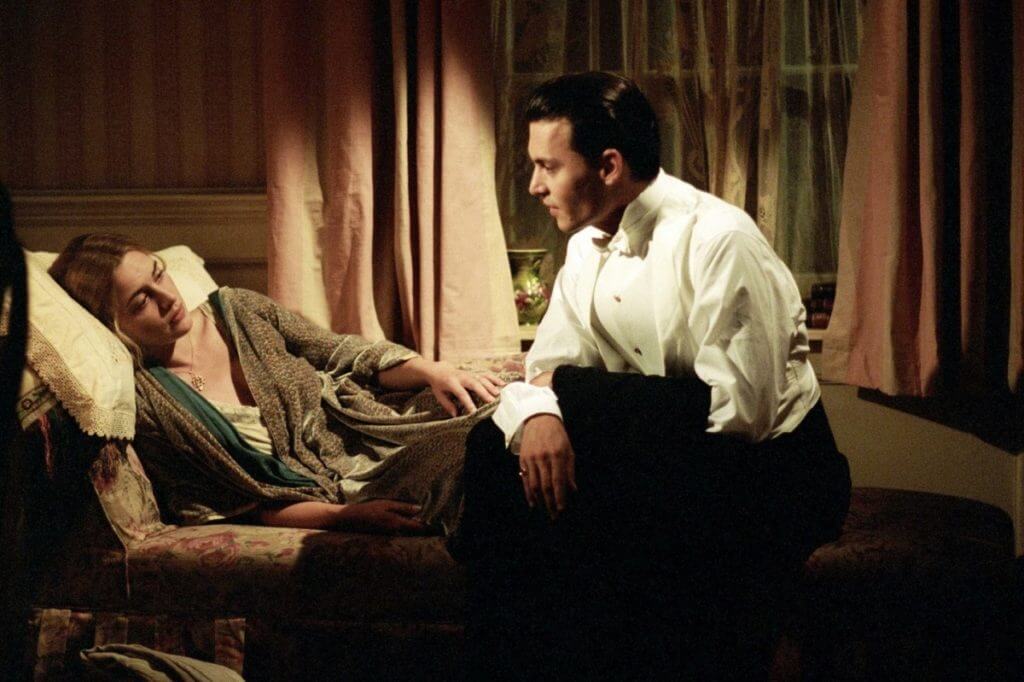 Sylvia’s overprotective mother and Barrie’s frigid wife are interesting, and Julie Christie and Radha Mitchell, respectively, bring a surprising amount of humanity to their roles. In reality, the situation may have been even more complicated, but either of these women could so easily have been made into a villain. Finding Neverland is smart in realizing that Mrs.du Maurier’s concern for her daughter and grandsons is legitimate, and really, if the situation were different, she’d be right. Mrs. Barrie’s cold, judgemental attitude is attributed to a miscarriage of her only child and feelings of being neglected by her husband. It’s easy to get swept up in the more whimsical aspects and take the “side” of Barrie and Sylvia, but the film gives their story added dimension by allowing everyone a chance to shine.

Barrie’s relationship with the boys is really sweet, and their play-acted fantasies are some of the best parts of the movie. The scenes where Barrie and Sylvia talk about the boys and other personal topics are very effective too. I wish Sylvia and Barrie could have had more moments alone, like the one where they discuss his mother. My guess is that, at 106 minutes, they didn’t want to make the movie much longer. But it still works, well and the scenes they do have together are perfect.

Finding Neverland is emotional, smart and well put together. I can’t say it will change your life, but it’s a lot of fun. It’s fantastical in some scenes and remarkably grounded in others, beautiful, thoughtful and whimsical. The cast is understated and well chosen, with Depp, in particular, shining in the lead. While the Peter Pan story itself doesn’t do much for me, the true story behind it is fun and poignant.  Finding Neverland has heart, imagination and humor. The relationships, music and acting are why you should be watching Finding Neverland.