“Liberation” is the episode we desperately needed, moving the season-long plot significantly forward while examining and illuminating some of the best qualities of the characters, specifically Barry and Iris. There’s also an inventive fight scene and an attempt to mitigate one of the season’s more egregious sins. It isn’t a complete home run – the subplot is primarily there to give some of the supporting characters busywork – but this is mostly just what I want from The Flash.

Barry begins to suspect something is wrong with Iris and asks for Cecile’s help. Iris comes up with a plan to escape the Mirror Universe, and Eva does what she can to dissuade her from trying it. Eva’s minions set out to accomplish their ultimate goal. Cisco and Ralph check on Caitlin/Frost.

“Liberation” opens with Barry, Cisco, and Ralph running a test of their first attempt at building a new Speed Force. It goes about as well as you’d expect it to go in an episode that isn’t the season finale: it’s a bust. There isn’t much to it, but it’s an important scene because it shows the audience that Barry and friends are working on the Speed Force, despite every episode not being bogged down with their experiments. It’s also used to set up Barry’s mindset – or, at least, the one he wants people to think he has. Barry is throwing himself into getting his powers back so he doesn’t have to think about Iris kicking him out of the apartment. It’s the usual stuff in a plot like this, but it’s a ruse, because “Liberation” goes in some unexpected directions after that. The first is Cecile confronting who she thinks is Iris and defending Barry. This is wonderfully refreshing; I’m so tired of seeing TV characters quit on a marriage at the slightest bump in the road and being congratulated for it. But the bigger shock comes when she talks to Barry.

Contrary to what the opening moments of “Liberation” would have us believe, Barry has figured out that the Iris he’s been living with is an imposter. He’s done a bunch of Hollywood chalkboard science and placed a call to Martian Manhunter to figure out who she really is, but what made him so sure was because he knew Iris would never give up on them, just as Barry wouldn’t. I’m glad they didn’t let Barry wallow in misery for a string of episodes; we know their “separation” is meaningless on an emotional level because we know that Iris has been replaced. Having Barry catch up to us quickly defuses a ton of unearned and empty drama. It also advances the plot to assure us that the five remaining episodes of season 6 won’t be wasted on wheel-spinning. And it’s true to Barry’s character; he’ll always follow his heart, and his heart always points to Iris.

More importantly, this becomes the backbone of “Liberation;” Barry will not accept that Iris turned her back on him, and, over in the Mirror Universe, Iris won’t give up on coming home to Barry. As he tries to figure out where she is and what her captors are up to, Iris has come up with a way to free herself from her prison and doesn’t let Eva’s protests stop her from trying to get back to her husband. Ultimately, neither is successful; Barry gets cut to pieces fighting Fake Iris, and Iris fails to escape the Mirror Universe despite learning the truth about Eva. But they’re not deterred, and neither will stop trying to find the other. I have to hand it to the writers; six seasons in, and this relationship is still beautiful and meaningful, and they find new ways to demonstrate what Barry and Iris mean to each other.

Barry and Iris’ bond informs the villains as well, and “Liberation” fleshes out and humanizes them too. Eva’s vendetta against her boring – and, thankfully, absent – husband is an inversion of Iris’ faith in hers. Eva wants to kill him, to destroy everything he’s built as revenge for his betrayal, but Iris sees through the bile and resentment and finds love. Eva’s feelings are so strong because, deep down, she still loves Joseph, and based on his expression when looking at her picture, Joseph likely still loves Eva. They’re going to get a lot of people killed in their marital spat, but, perhaps perversely, their vendetta is fueled by love. Then there’s Fake Iris, who is maybe the biggest surprise in “Liberation.” She turns out to be very human indeed, more so than her evil cohorts, and her desire is not the cult-like devotion of the others, but to be human, something they cannot be afforded. And it’s Barry’s love for Iris that, in her final moments, lets her feel in a way she otherwise couldn’t have. I didn’t expect to feel that much sympathy for someone whose face I’ve wanted rearranged for the past several episodes, but here we are. 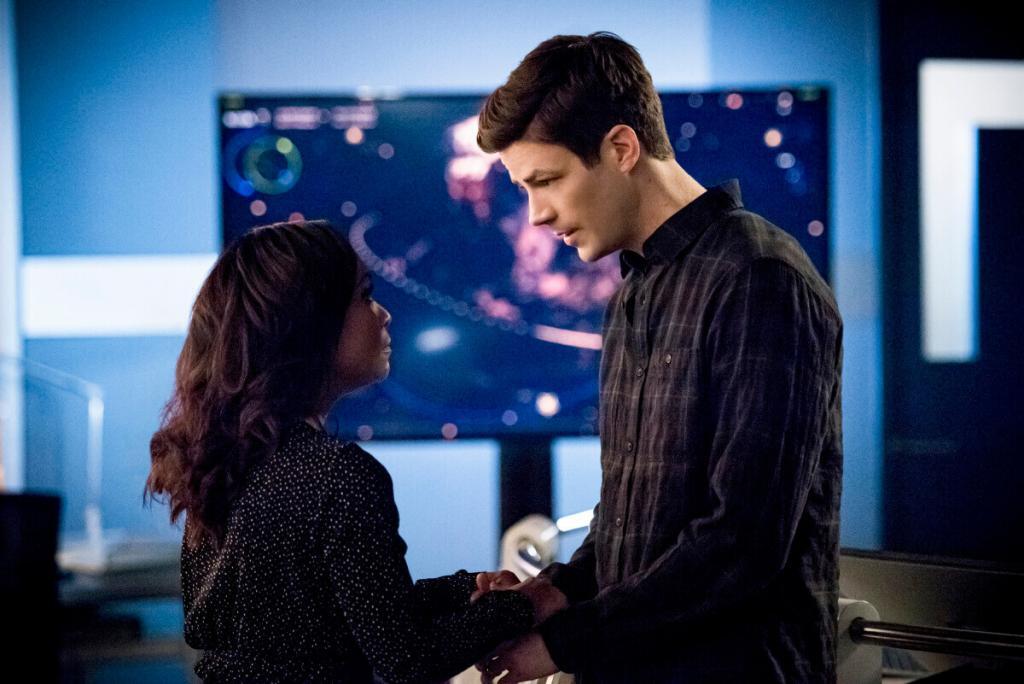 There is another villain in “Liberation,” one who comes as a surprise (or would have if I saw it before I got a revealing tweet from Sendhil Ramamurthy in my feed): Bloodwork is back! And he turns out to be the lynchpin for Eva’s plan because she needs some of his blood to open the gateway to the Mirror Universe. Bloodwork is only in one scene, but it’s a great one, showing the previously squandered promise of his character. I’m glad he talked about his desire to save lives again, indicating that he isn’t the mindless beast they turned him into when they scrapped his arc earlier this season. He does have a little monster in him, however, and his easy dispatching of Eva’s henchmen was a bit scary; Sendhil Ramamurthy plays this dichotomy to the hilt, believably striving for good while embracing evil as his means. Bloodwork’s tease that he’d rather play “the long game” than escape from prison is an intriguing suggestion of what’s to come. Will he return this season? Will he become a recurring antagonist like Reverse-Flash? Will his gift to Eva prove to be part of his plan? I can’t wait to find out.

In contrast to this plot, Cisco and Ralph’s visit to Caitlin’s apartment feels like a waste of time. I love Caitlin and Cisco, and I like Ralph, but I’d rather see them do something a little more interesting than “Caitlin is having cold power problems, so Ralph has to do a thing while Cisco does a thing to fix her.” I imagine this will get more interesting when they explore what’s happening to Caitlin a little deeper, and it will be fun to see her interact with her mother again, but in “Liberation,” it just takes time away from a more interesting story. I do appreciate the way they’re handling Danielle Panabaker’s pregnancy, though. Oftentimes when an actress on a TV show is expecting, they have her character get pregnant as well, and it’s kind of a dull plotline. But some shows write around it (check out season 4 of How I Met Your Mother and marvel at how oversized Lily and Robin’s pocketbooks are), and others use it as the springboard for an inventive storyline (like Frasier, where Jane Leeves’ pregnancy was disguised as simple weight gain and used to flesh out – you’re welcome – her burgeoning relationship with Niles). I’m glad The Flash is being creative instead of getting us set for a season of diaper changing amid the superhero action. 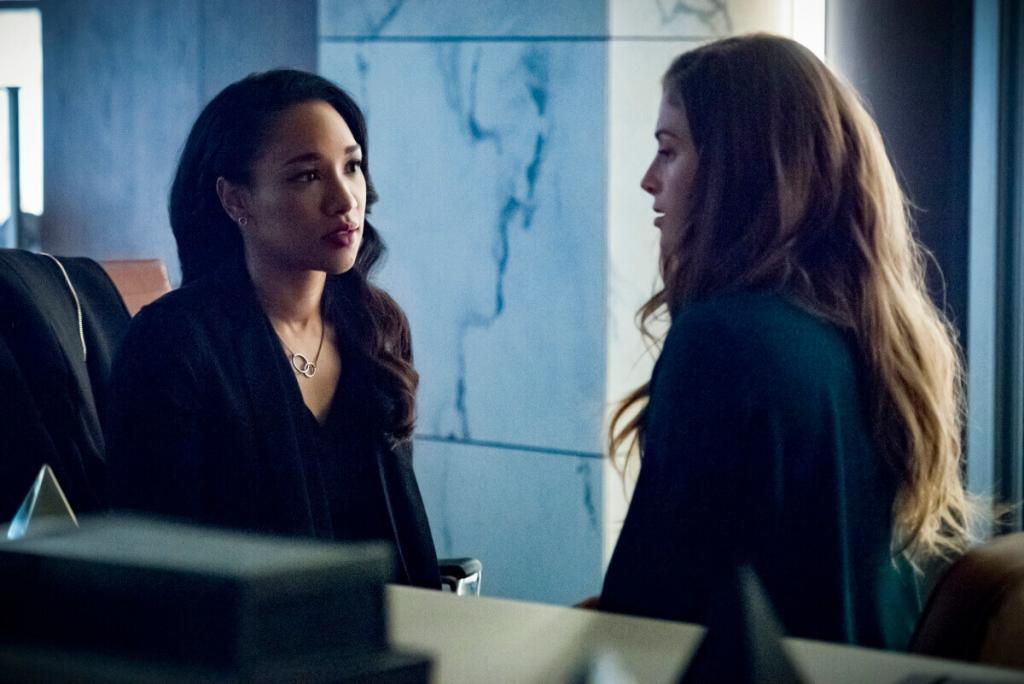 Speaking of action and creativity, “Liberation” has a very cool fight scene near the end between Barry and Fake Iris. It turns out that Eva’s minions can turn themselves into glass as well, and Fake Iris gets her T-1000 on when she turns her arms into long blades. This is an even hairier situation because Barry can’t use his speed, so he’s desperately trying to evade the constant slashes his opponent sends his way. That would have been enough for a tense dustup, but it gets even more dangerous when Fake Iris uses the many mirrors she’s set up in the apartment to pass her knife arms through and slash at Barry from all directions. But the showstopper is when a mirror on the ceiling shatters, and Barry has no escape from the attacks that come from every direction. Few times has he felt so disadvantaged, and this was an effective way to show how reliant he often is on his speed while doing something new.

“Liberation” is an excellent episode that furthers the plot and reaffirms Barry and Iris’ love for each other while placing more hurdles in their path. A lackluster subplot doesn’t detract from excellent character work, the welcome return of a familiar face, and a great fight scene.